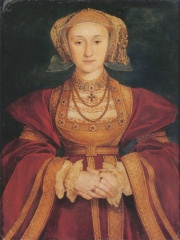 Anne of Cleves (German: Anna von Kleve; 1515 – 16 July 1557) was Queen of England from 6 January to 12 July 1540 as the fourth wife of King Henry VIII. Not much is known about Anne before 1527, when she became betrothed to Francis, Duke of Bar, son and heir of Antoine, Duke of Lorraine, although their marriage did not proceed. In March 1539, negotiations for Anne's marriage to Henry began, as Henry believed that he needed to form a political alliance with her brother, William, who was a leader of the Protestants of western Germany, to strengthen his position against potential attacks from Catholic France and the Holy Roman Empire.Anne arrived in England on 27 December 1539 and married Henry on 6 January 1540, but after six months, the marriage was declared unconsummated and, as a result, she was not crowned queen consort. Following the annulment, Henry gave her a generous settlement, and she was thereafter known as the King's Beloved Sister. Read more on Wikipedia

Anne of Cleves was a German princess who was married to King Henry VIII of England, but she was divorced after six months of marriage.

Page views of Anne of Cleves by language

Among companions, Anne of Cleves ranks 32 out of 673. Before her are Victoria, Princess Royal, Catherine Howard, Olympias, Queen Silvia of Sweden, Messalina, and Klara Hitler. After her are Mileva Marić, Tughril, Françoise d'Aubigné, Marquise de Maintenon, Eugénie de Montijo, Maria Theresa of Spain, and Livia.

Among people born in 1515, Anne of Cleves ranks 3. Before her are Şehzade Mustafa and Teresa of Ávila. After her are Philip Neri, Lucas Cranach the Younger, Injong of Joseon, Mary of Guise, Piali Pasha, Pierre Lescot, Petrus Ramus, Felix of Cantalice, and Sebastian Castellio. Among people deceased in 1557, Anne of Cleves ranks 2. Before her is Jacques Cartier. After her are John III of Portugal, Pontormo, Niccolò Fontana Tartaglia, Bona Sforza, Olaus Magnus, Mikael Agricola, Sebastian Cabot, Emperor Go-Nara, Lautaro, and Ferrante Gonzaga.