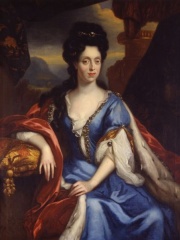 Anna Maria Luisa de' Medici (11 August 1667 – 18 February 1743) was a Tuscan noblewoman who was the last lineal descendant of the main branch of the House of Medici. A patron of the arts, she bequeathed the Medici's large art collection, including the contents of the Uffizi, Palazzo Pitti and the Medicean villas, which she inherited upon her brother Gian Gastone's death in 1737, and her Palatine treasures to the Tuscan state, on the condition that no part of it could be removed from "the Capital of the grand ducal State....[and from] the succession of His Serene Grand Duke."Anna Maria Luisa was the only daughter of Cosimo III de' Medici, Grand Duke of Tuscany, and Marguerite Louise d'Orléans, a niece of Louis XIII of France. On her marriage to Elector Johann Wilhelm II, she became Electress of the Palatinate, and, by patronising musicians, she earned for the contemporary Palatine court the reputation of an important music centre. Read more on Wikipedia

Anna Maria Luisa de' Medici was the daughter of Cosimo III, Grand Duke of Tuscany, and Marguerite Louise d'Orléans. She married her first cousin Louis Joseph, Dauphin of France, the eldest son of King Louis XV of France and Queen Marie Leszczyńska. Anna Maria Luisa is most famous for being the mother of the last Valois Dauphin, King Louis XVI of France.

Among noblemen, Anna Maria Luisa de' Medici ranks 194 out of 843. Before her are Guntram the Rich, Princess Ingeborg of Denmark, Caroline, Princess of Hanover, Edmund Tudor, Duke of Somerset, Liliʻuokalani, and Cymburgis of Masovia. After her are Dmitry of Uglich, Marie-Caroline of Bourbon-Two Sicilies, Duchess of Berry, Maria Theresa of Savoy, Carlota Joaquina of Spain, Frederik, Crown Prince of Denmark, and Stéphanie de Beauharnais.