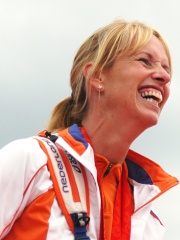 Theodora Elisabeth Gerarda "Anky" van Grunsven (born 2 January 1968) is a Dutch dressage champion who is the only rider to record three successive Olympic wins in the same event. Along with her Olympic successes, she has won numerous medals at the World Equestrian Games (WEG), and is the only rider to have competed at every WEG since they began in 1990. Between 1990 and 2006, she competed at the Games in dressage, but in 2010 she was named as part of the Dutch reining team, marking a major change in discipline.In addition to her Olympic and World Equestrian Games successes, van Grunsven holds the record for the most wins at the Dressage World Cup, winning the event nine times between 1995 and 2008. Read more on Wikipedia