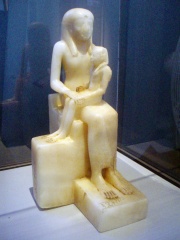 Ankhesenpepi II or Ankhesenmeryre II was a queen consort during the Sixth Dynasty of Egypt. She was the wife of Kings Pepi I and Merenre Nemtyemsaf I, and the mother of Pepi II. She likely served as regent during the minority of her son. Read more on Wikipedia

Since 2007, the English Wikipedia page of Ankhesenpepi II has received more than 34,008 page views. Her biography is available in 18 different languages on Wikipedia (up from 15 in 2019). Ankhesenpepi II is the 535th most popular companion (down from 487th in 2019).

Among people born in 2400 BC, Ankhesenpepi II ranks 4. Before her are Pepi I Meryre, Unas, and Iput. After her are Lugalanda and Enshakushanna.