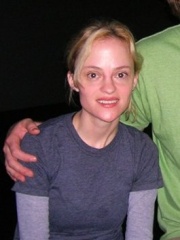 Angela Marie Bettis (born January 9, 1973) is an American film and stage actress, film producer, and director best known for her lead roles in the 2002 TV adaptation of the Stephen King novel Carrie, May (2002), and Girl, Interrupted (1999). In addition to her work in film, Bettis also starred in two Broadway productions: The Father in 1996 with Frank Langella, and as Abigail Williams in a 2002 revival of Arthur Miller's The Crucible alongside Liam Neeson and Laura Linney. Read more on Wikipedia

Since 2007, the English Wikipedia page of Angela Bettis has received more than 499,236 page views. Her biography is available in 21 different languages on Wikipedia making her the 6,932nd most popular actor.