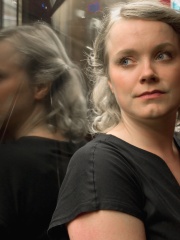 Ane Brun (Norwegian pronunciation: [ˈɑ̂ːnə ˈbrʉːn]; born Ane Brunvoll on 10 March 1976) is a Norwegian songwriter, guitarist, and vocalist of Sami origin. Since 2003, she has recorded ten albums, eight of which are studio albums of original material (including a collection of duets), an acoustic album, and a covers album; she has also released three live albums, two compilations, one live DVD, and four EPs. Read more on Wikipedia

Among musicians, Ane Brun ranks 1,728 out of 2,675. Before her are Curtis Fuller, Leonidas Kavakos, Takanori Nishikawa, Maksim Mrvica, Jerry Wexler, and Chris Dreja. After her are Will Champion, Steve Smith, Muhal Richard Abrams, Jimmy Van Heusen, Nigo, and Gavin Harrison.

Among MUSICIANS In Norway