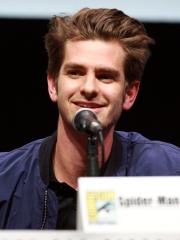 Andrew Russell Garfield (born 20 August 1983) is a British and American actor. An alumnus of the Royal Central School of Speech and Drama, he is the recipient of various accolades, including a Tony Award and a British Academy Television Award, in addition to receiving nominations for an Academy Award, a Laurence Olivier Award, two Golden Globe Awards and three British Academy Film Awards. Born in Los Angeles and raised in Epsom, England, Garfield began his career on the UK stage and in television productions. Read more on Wikipedia

Just Jared
Andrew Garfield Talks All About Reuniting with Tom Holland at the GQ Party
Andrew Garfield and Tom Holland reunited this month while attending GQ‘s Men of the Year party and we’re learning some new details about their night out! Both of the actors have played Spider-Man and they definitely share a bond, but this was only their secon…
Just Jared
Complex
Watch Andrew Garfield Get Emotional Over Surprise Video From 'Cobra Kai' Cast
Andrew Garfield became visibly overwhelmed after discovering that the cast of his "obsession" show 'Cobra Kai' recorded a personalized video for him.
Jose Martinez
The Times of India
Fans Laud Actor Andrew Garfield, Call Him Brave For Talking About Grief After Losing His Mother
(Trigger warning: This post talks about grief, loss and losing a loved one.)Losing a parent is an ache of a lifetime. No consolation feels justified enough, and the pain feels heavy on days when you least expect it to.For actor Andrew Garfield, this life-chan…
Isha Sharma
New Zealand Herald
Andrew Garfield explains the grief of losing his mother, strikes a chord with fans
Hollywood star Andrew Garfield's beautiful answer to a question about his late mother has resonated with viewers around the world.Hollywood star Andrew Garfield struck a chord with viewers of The Late Show With Stephen Colbert this...
[email protected]