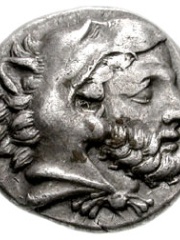 Amyntas III (Greek: Αμύντας Γ΄ της Μακεδονίας) (420 - 370 BC) was king of the Ancient Greek kingdom of Macedon in 393 BC and again from 392 to 370 BC. He was the son of Arrhidaeus and grandson of Amyntas, one of the sons of Alexander I. Read more on Wikipedia

Ammyntas III of Macedon is most famous for his victory over the Illyrians.

Page views of Amyntas III of Macedons by language

Among politicians, Amyntas III of Macedon ranks 2,707 out of 15,710. Before him are Yejong of Joseon, Thomas Palaiologos, William Wilberforce, William II of Holland, Stanley Baldwin, and Vsevolod Meyerhold. After him are Anne of France, Eliot Ness, Sweyn III of Denmark, Abdullah Yusuf Azzam, Friedrich Ludwig Jahn, and Huáscar.

Others Deceased in 370 BC