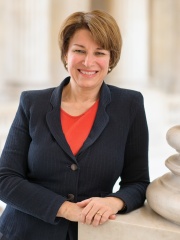 Amy Jean Klobuchar ( KLOH-bə-shar; born May 25, 1960) is an American lawyer and politician serving as the senior United States senator from Minnesota. A member of the Minnesota Democratic–Farmer–Labor Party (DFL), Minnesota's affiliate of the Democratic Party, she previously served as the Hennepin County attorney. She announced her candidacy for the Democratic nomination for President of the United States in the 2020 election in February 2019; however, she suspended her campaign on March 2, 2020, and endorsed Joe Biden.Born in Plymouth, Minnesota, Klobuchar is a graduate of Yale University and the University of Chicago Law School. Read more on Wikipedia

Since 2007, the English Wikipedia page of Amy Klobuchar has received more than 6,010,463 page views. Her biography is available in 23 different languages on Wikipedia making her the 13,519th most popular politician.