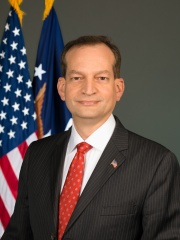 Rene Alexander Acosta (born January 16, 1969) is an American attorney and politician, who served as the 27th United States Secretary of Labor from 2017 to 2019. President Donald Trump nominated Acosta to be Labor Secretary on February 16, 2017, and he was confirmed by the U.S. Senate on April 27, 2017. A member of the Republican Party, he was appointed by President George W. Bush to the National Labor Relations Board, and later served as the assistant attorney general for civil rights and the U.S. attorney for the Southern District of Florida. Read more on Wikipedia

Since 2007, the English Wikipedia page of Alexander Acosta has received more than 1,775,459 page views. His biography is available in 19 different languages on Wikipedia making him the 14,052nd most popular politician.