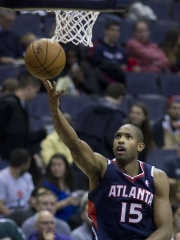 Alfred Joel Horford Reynoso (born June 3, 1986) is a Dominican professional basketball player for the Philadelphia 76ers of the National Basketball Association (NBA). He played college basketball for the University of Florida, and was the starting center on the Gators teams that won back-to-back NCAA national championships in 2006 and 2007. He was drafted with the third overall pick in the 2007 NBA draft by the Atlanta Hawks, a team he played nine seasons with before joining the Celtics in 2016. Read more on Wikipedia

Since 2007, the English Wikipedia page of Al Horford has received more than 2,973,526 page views. His biography is available in 25 different languages on Wikipedia making him the 343rd most popular basketball player.

Among BASKETBALL PLAYERS In Dominican Republic