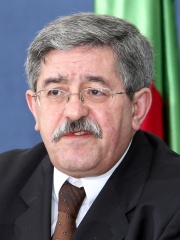 Ahmed Ouyahia (Arabic: أحمد أويحيى, romanized: Aḥmad ʾŪyaḥyā; 2 July 1952) is an Algerian politician who was Prime Minister of Algeria four times (1995–98, 2004–2006, 2008–2012, 2017–2019). A career diplomat, he also served as Minister of Justice, and he was one of the founders of the Democratic National Rally (RND) as well as the party's secretary-general. He is considered by Western observers to be close to the military of Algeria and a member of the "eradicator" faction in the 1990s civil war against Islamist militants. Read more on Wikipedia

Among politicians, Ahmed Ouyahia ranks 9,472 out of 15,577. Before him are René Moawad, John Charles, Count Palatine of Gelnhausen, Giric, Princess Nadezhda of Bulgaria, Petar Snačić, and He Long. After him are Alexander, Duke of Schleswig-Holstein-Sonderburg, Lynne Cheney, Molon, Louis, Duke of Guyenne, Lucius Gellius Publicola, and Hosokawa Tadaoki.