This page contains a list of the greatest Argentinean Tennis Players. The pantheon dataset contains 1,148 Tennis Players, 39 of which were born in Argentina. This makes Argentina the birth place of the 9th most number of Tennis Players behind Czechia and United Kingdom. 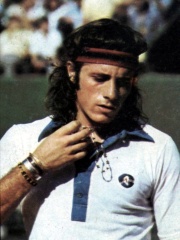 With an HPI of 58.12, Guillermo Vilas is the most famous Argentinean Tennis Player.  His biography has been translated into 41 different languages on wikipedia.

Guillermo Vilas (born 17 August 1952) is an Argentine former professional tennis player. Vilas was the No. 1 of the Grand Prix seasons in 1974, 1975 and 1977, and won four Grand Slam tournaments, one year-end Masters, and a total of 62 ATP titles. World Tennis, Agence France-Presse and Livre d'or du tennis 1977 (Christian Collin-Bernard Ficot), among other rankings and publications, rated him as world No. 1 in 1977 (while others ranked Björn Borg or Jimmy Connors No. 1). In the ATP computer rankings, he peaked at No. 2 in April 1975, a position he held for a total of 83 weeks. He was inducted into the International Tennis Hall of Fame in 1991, two years after his first retirement.Known for his prolific match play, especially on clay, he became the second man to win more than 900 matches in the Open Era, and his number of match-wins on clay (659) is by far the most of the era. His peak was the 1977 season during which he won two major titles (both on clay), had two long match win streaks of 46 all-surface and 53 on clay, and finished with an Open Era record of match wins. In 2016, The Daily Telegraph ranked him as the 3rd best male clay-court player of all time, behind Rafael Nadal and Björn Borg. In 2018, Steve Tignor for Tennis Magazine ranked him as the 16th greatest tennis player of the Open Era. Historical and statistical studies presented in 2015 by Argentinian journalist Eduardo Puppo and Romanian mathematician Marian Ciulpan concluded that Vilas should have been No. 1 in the old ATP ranking system for seven weeks between 1975 and 1976. The ATP Tour and its chief executive at that time, Chris Kermode, although not refuting the data, decided not to officially recognize Vilas. The controversy is still in the legal stage. In October 2020, Netflix released a documentary film about the Vilas case titled "Guillermo Vilas: Settling the Score". 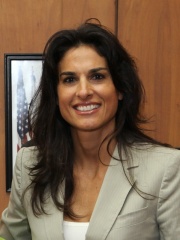 With an HPI of 54.87, Gabriela Sabatini is the 2nd most famous Argentinean Tennis Player.  Her biography has been translated into 48 different languages.

Gabriela Beatriz Sabatini (Spanish pronunciation: [gaˈβɾjela saβaˈtini]; born 16 May 1970) is an Argentine-Italian former professional tennis player. A former world No. 3 in both singles and doubles, Sabatini was one of the leading players from the mid-1980s to the mid-1990s, amassing 41 titles. In singles, Sabatini won the 1990 US Open, the Tour Finals in 1988 and 1994, and was runner-up at Wimbledon 1991, the 1988 US Open, and the silver medalist at the 1988 Olympics. In doubles, Sabatini won Wimbledon in 1988 partnering Steffi Graf, and reached three French Open finals. Among Open era players who did not reach the world No. 1 ranking, Sabatini has the most wins over reigning world No. 1 ranked players. In 2006, she was inducted into the International Tennis Hall of Fame and in 2018 Tennis Magazine ranked her as the 20th-greatest female player of the preceding 50 years. 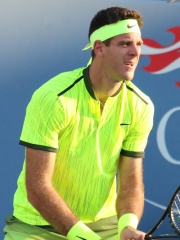 With an HPI of 49.65, Juan Martín del Potro is the 3rd most famous Argentinean Tennis Player.  His biography has been translated into 54 different languages.

Juan Martín del Potro (Spanish pronunciation: [xwan maɾˈtin del ˈpotɾo]) (born 23 September 1988) is an Argentinian retired professional tennis player. Del Potro's biggest achievement is a major title: the 2009 US Open, where he defeated Rafael Nadal in the semifinals and the five-time defending champion Roger Federer in the final. He was the only man outside the Big Three (Novak Djokovic, Federer, and Nadal) to win a major between the 2005 French Open and the 2012 US Open, a span of 30 tournaments.Del Potro's other career highlights include reaching the 2018 US Open final, winning an Olympic bronze medal in men's singles at the 2012 London Olympics and the silver medal at the 2016 Rio Olympics, winning Indian Wells in 2018, and leading Argentina to the 2016 Davis Cup title; but his career has also been hampered by a succession of wrist and knee injuries. Del Potro first entered the top 10 of the ATP rankings on 6 October 2008. In January 2010, he reached a then-career-high ranking of world No. 4, after which he withdrew from most of the season due to a right wrist injury. In 2016, del Potro led Argentina to its first ever Davis Cup title by defeating Croatia's Marin Čilić in the final from two sets down. He reached his first major semifinal in four years by defeating Federer in the quarterfinals of the 2017 US Open. In 2018, he won his first Masters 1000 title at the Indian Wells Masters, defeating the defending champion and world No. 1 Federer in the final. After reaching the semifinals of the 2018 French Open, he matched his career-high ranking of No. 4, and in August 2018 he reached the world No. 3 ranking for the first time. At the 2018 US Open, he reached his second major final, where he lost to Novak Djokovic. Del Potro did not play between June 2019 and February 2022 because of pain from a knee injury, and said he would retire as a result. 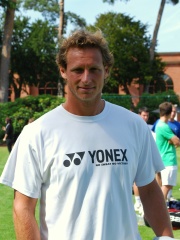 With an HPI of 46.09, David Nalbandian is the 4th most famous Argentinean Tennis Player.  His biography has been translated into 46 different languages.

David Pablo Nalbandian (Spanish pronunciation: [daˈβið ˈpaβlo nalβanˈdjan]; born 1 January 1982) is an Argentine retired professional tennis player who played on the ATP Tour from 2000 until his retirement in 2013. He reached the highest ranking in singles of world No. 3 in March 2006. Nalbandian was runner-up in the singles event at the 2002 Wimbledon Championships. During his career, he won 11 singles titles, including the Tennis Masters Cup in 2005 and two Masters 1000 tournaments. Nalbandian is the only male Argentine player in history who ever reached the semifinals or better at all four Grand Slam tournaments and reached the men's singles final at Wimbledon.He was a member of the Argentinian Davis Cup team who reached the finals of the World Group in 2006, 2008 and 2011. Nalbandian played right-handed with a two-handed backhand, which was known for being a devastating shot. Since his retirement, Nalbandian has taken up the sport of rally racing and has competed in Rally Argentina. 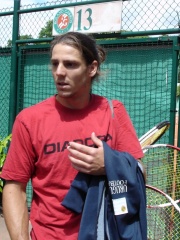 With an HPI of 42.82, Gastón Gaudio is the 5th most famous Argentinean Tennis Player.  His biography has been translated into 36 different languages. 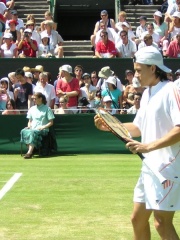 With an HPI of 41.56, Guillermo Coria is the 6th most famous Argentinean Tennis Player.  His biography has been translated into 34 different languages.

Guillermo Sebastián Coria (born 13 January 1982), nicknamed El Mago (The Magician in Spanish), is an Argentine retired professional tennis player. He reached a career-high ATP world No. 3 singles ranking in May 2004. Coria achieved his best results on clay, where he won eight of his nine ATP singles titles, and during his prime years in 2003 and 2004 was considered "the world's best clay-court player." He reached the final of the 2004 French Open, where he was defeated by Gastón Gaudio despite serving for the match twice and being up two sets to love. In later years, injuries and a lack of confidence affected his game, and he retired in 2009 at the age of 27. Between 2001 and 2002, he served a seven-month suspension for taking the banned substance nandrolone. 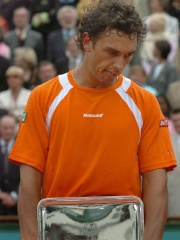 With an HPI of 39.56, Mariano Puerta is the 7th most famous Argentinean Tennis Player.  His biography has been translated into 25 different languages.

Mariano Rubén Puerta (Spanish pronunciation: [maˈɾjano ruˈβem ˈpweɾta]; born 19 September 1978) is an Argentine former professional tennis player. He reached a career-high ATP world No. 9 singles ranking in August 2005. His career highlight of reaching the final of the French Open in 2005 was marred by testing positive for the banned substance etilefrine in a drugs test directly after the French Open final, for which he received an eight-year doping ban. 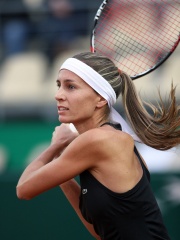 With an HPI of 39.32, Gisela Dulko is the 8th most famous Argentinean Tennis Player.  Her biography has been translated into 32 different languages.

Gisela Dulko (Spanish pronunciation: [xiˈsela ˈðulko]; born 30 January 1985) is a former Argentine tennis player. Although she enjoyed modest success in singles, reaching a career-high ranking of world No. 26 and winning four WTA titles, her speciality was doubles, where she achieved the world No. 1 ranking and won 17 WTA titles. Partnering with Flavia Pennetta, Dulko won the 2010 WTA Tour Championships and the 2011 Australian Open. She also reached the mixed-doubles final at the 2011 US Open, with Eduardo Schwank. During her career, Dulko upset a number of top players on the tour, including Maria Sharapova in the second round of Wimbledon in 2009, Samantha Stosur in the third round of Roland Garros in 2011, and Martina Navratilova in the second round of Wimbledon in 2004 and in Navratilova's final Grand Slam singles match. Dulko retired from professional tennis on 18 November 2012, aged 27. 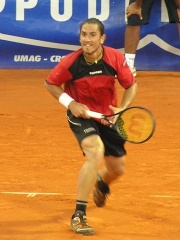 With an HPI of 37.61, Guillermo Cañas is the 9th most famous Argentinean Tennis Player.  His biography has been translated into 28 different languages.

Guillermo Ignacio Cañas ([ɡiˈʃeɾmo ˈkaɲas]; born November 25, 1977), often referred to as Willy Cañas, is a retired tennis player from Argentina. He was born in Buenos Aires and named after Argentine tennis star Guillermo Vilas. Cañas won the Canada Masters in 2002, and reached the quarterfinal stage of the French Open in 2002, 2005 and 2007. His career-high singles ranking was world No. 8, achieved in June 2005. After being suspended in August 2005, Cañas returned to the circuit in September 2006 at ATP Challenger level. 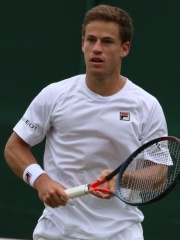 With an HPI of 37.27, Diego Schwartzman is the 10th most famous Argentinean Tennis Player.  His biography has been translated into 27 different languages.

Diego Sebastián Schwartzman (Spanish pronunciation: [ˈdjeɣo seβasˈtjan ˈʃwaɾdzman], German: [ˈʃvaʁtsman]; born 16 August 1992) is an Argentine professional tennis player. He has won four ATP singles titles and reached his career-high singles ranking of world No. 8 in October 2020. As a clay court specialist, his best results have been on this surface. He is noted for his high-quality return game.When he reached the quarterfinals of the 2017 US Open, the 170-centimetre (5 ft 7 in) Schwartzman was the shortest Grand Slam quarterfinalist since the equally tall Jaime Yzaga at the 1994 US Open. Schwartzman said: "It’s not just for the big guys here."Schwartzman reached his first Masters final at the 2020 Italian Open, defeating defending champion and world No. 2, Rafael Nadal, in straight sets, and Denis Shapovalov along the way. He lost to Novak Djokovic in the final. A month later, at the 2020 French Open, he defeated world No. 3 Dominic Thiem to reach his maiden Grand Slam semifinal, where he became the shortest man to reach a Grand Slam singles semifinal since the 5-foot-6-inch (168 cm) Harold Solomon at the 1980 French Open.

Pantheon has 39 people classified as tennis players born between 1952 and 1997. Of these 39, 39 (100.00%) of them are still alive today. The most famous living tennis players include Guillermo Vilas, Gabriela Sabatini, and Juan Martín del Potro. As of April 2022, 4 new tennis players have been added to Pantheon including Franco Squillari, Laura Montalvo, and Nadia Podoroska.