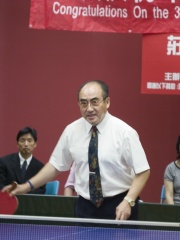 With an HPI of 49.17, Zhuang Zedong is the most famous Chinese Table Tennis Player.  His biography has been translated into 15 different languages on wikipedia.

Zhuang Zedong (Chuang Tse-tung; August 25, 1940 – February 10, 2013) was a Chinese table tennis player, three-time world men's singles champion and champion at numerous other table tennis events and a well-known political personality during the tumult of the Cultural Revolution. His chance meeting with American table tennis player, Glenn Cowan, during the 31st World Table Tennis Championship, later referred to as ping-pong diplomacy, triggered the first thawing of the ice in Sino-American relations since 1949. Zhuang was once married to the pianist Bao Huiqiao, and his second wife was the Chinese-born Japanese Atsuko Sasaki (佐々木敦子). 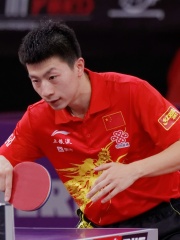 With an HPI of 42.55, Ma Long is the 2nd most famous Chinese Table Tennis Player.  His biography has been translated into 34 different languages.

Ma Long (Chinese: 马龙; pinyin: Mǎ Lóng; born 20 October 1988) is a Chinese table tennis player and the reigning Olympic singles champion. Widely regarded as the greatest table tennis player of all time, he is the first and only male player to complete a career Double Grand Slam as the Olympic gold medalist in men's singles in 2016 and 2020. He held the ranking of number 1 for a total of 64 months (and 34 consecutive months from March 2015), the most by any male in the history of table tennis. He is also champion in World Championships in men's singles in 2015, 2017 and 2019. His records led the International Table Tennis Federation to nickname him as "The Dictator" and "The Dragon" (derived from his name, Lóng, which represents the zodiac year of his birth). Since 2014, he has been the captain of the Chinese national table tennis men's team. 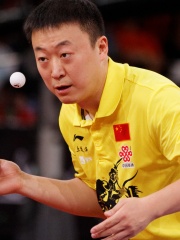 With an HPI of 42.07, Ma Lin is the 3rd most famous Chinese Table Tennis Player.  His biography has been translated into 25 different languages.

Ma Lin (simplified Chinese: 马琳; traditional Chinese: 馬琳; pinyin: Mǎ Lín; born February 19, 1980) is a retired Chinese table tennis player. He learned to play table tennis at the age of five and became a member of the provincial team in 1990. In 1994, he joined the Chinese national team. Ma Lin is the only male player ever to win Olympic gold in Singles, Doubles and Team. Additionally, he previously held a professional era record of 5 major titles (4 World Cups and 1 Olympic Gold), having won more World Cups than any other male table tennis player in history. (Note: as of 2020, Ma Lin is now tied with Fan Zhendong for the most World Cup wins of all male players with 4 World Cups each.) He has since been surpassed by Ma Long, who has won 7 major titles.Since retiring in December 2013, Ma Lin has been serving as the head coach of the Guangdong provincial table tennis team. 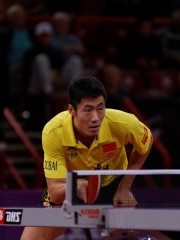 With an HPI of 42.06, Wang Liqin is the 4th most famous Chinese Table Tennis Player.  His biography has been translated into 26 different languages.

Wang Liqin (simplified Chinese: 王励勤; traditional Chinese: 王勵勤; pinyin: Wáng Lìqín; born June 18, 1978, Shanghai) is a retired Mainland Chinese table tennis player. As of January 2014, he is ranked 12th in the International Table Tennis Federation (ITTF). He began playing at the age of 6 and was picked for the Chinese men's national squad in 1993 when he was only 15 years old. He holds three majors (3 World Championships). He has been ranked #1 by ITTF for 25 consecutive months, from September 2000 to September 2002, which is the second-longest period for being consecutive #1 of the world as of January 2011. At the end of 2013, Wang Liqin retired from the national team. 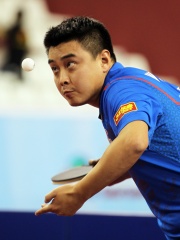 With an HPI of 41.06, Wang Hao is the 5th most famous Chinese Table Tennis Player.  His biography has been translated into 26 different languages.

Wang Hao (Chinese: 王皓; pinyin: Wáng Hào; born 15 December 1983) is a retired Chinese table tennis player. He became the world champion in men's singles in Yokohama, Japan, in May 2009, defeating three-time World Champion Wang Liqin 4–0. His other notable accomplishments include being a three-time World Cup Champion in 2007, 2008 and 2010, a singles silver medalist at the 2004 Summer Olympics, 2008 Summer Olympics and the 2012 Summer Olympics. In January 2010, he was replaced by Ma Long as the #1 rank on the official ITTF world rankings. He was previously ranked #1 on the official ITTF world rankings for 27 consecutive months, from October 2007 to December 2009. In April 2011, he was again the top ranked male player in the world. He is known to execute the Reverse Penhold Backhand (RPB) with exceptional skill. During his career, he has appeared twelve times in major world competition finals, which is a record. In men's singles, he has won the Asian Championship, Asian Cup, Asian Games, and Chinese National Games at least once. Wang Hao retired from the national team at the end of 2014. 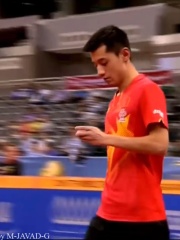 With an HPI of 39.62, Zhang Jike is the 6th most famous Chinese Table Tennis Player.  His biography has been translated into 27 different languages.

Zhang Jike (simplified Chinese: 张继科; traditional Chinese: 張繼科; pinyin: Zhāng Jìkē; born 16 February 1988) is a retired Chinese table tennis player.Zhang became the fourth male player in the history of table tennis to achieve a career Grand Slam when he won gold in men's singles at the Olympic games in London 2012. The first three are Jan-Ove Waldner (in 1992), Liu Guoliang (in 1999), and Kong Linghui (in 2000). Zhang won the Grand Slam in only 445 days. He won, consecutively, first WTTC 2011, then World Cup 2011, and then London Olympics 2012, which made him the fastest player ever to win a Grand Slam. After the first Grand Slam, he won WTTC 2013 and World Cup 2014.

With an HPI of 39.18, Deng Yaping is the 7th most famous Chinese Table Tennis Player.  Her biography has been translated into 25 different languages.

Deng Yaping (simplified Chinese: 邓亚萍; traditional Chinese: 鄧亞萍; pinyin: Dèng Yàpíng; born February 6, 1973) is a Chinese table tennis player, who won eighteen world championships including four Olympic championships between 1989 and 1997. She is regarded as one of the greatest players in the history of the sport. 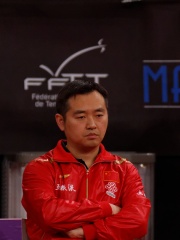 With an HPI of 38.50, Kong Linghui is the 8th most famous Chinese Table Tennis Player.  His biography has been translated into 22 different languages.

Kong Linghui (simplified Chinese: 孔令辉; traditional Chinese: 孔令輝; pinyin: Kǒng Lìnghuī; born October 18, 1975) is a male Chinese table tennis player. He competed in the 1996 Summer Olympics, as well as in the 2000 Summer Olympics and the 2004 Summer Olympics.In 1996, Kong won the gold medal in the men's doubles competition together with Liu Guoliang. Four years later, he won the gold medal in the men's singles competition and the silver medal in the doubles event again together with Liu Guoliang. This made him the third player to achieve a career grand slam of singles championship wins in three majors (Olympics, World Cup, World Championships). He is considered by many to be the most complete player of all time. In 2004, Kong was eliminated in the third round of the Men's Doubles Competition together with his new partner Wang Hao. Kong's style was believed to be modeled on the top European players of the late 1980s through to the late 1990s, namely the Swedes Jan Ove Waldner and Jörgen Persson, who won the World Championships in Dortmund in 1989 and Chiba in 1991 respectively. They utilised the shakehand grip, and played consistent good all-round games characterised by playing close to mid distance from the table, equal on both backhand and forehand sides and being strong in both attack and containing - both players have excellent receive of service techniques and solid blocking games. In China's attempt to shake the early 1990s European male dominance of the sport - where players such as Saive (Belgium), Primorac (Croatia), Gatien (France), Waldner, Persson and Appelgren (Sweden), and Rosskopf (Germany) were dominating proceedings internationally, they sent the young Kong to Sweden in an unprecedented move to learn the European style of play. He arrived back in China in 1993, and within three years, was ranked world No. 1 as of December 1995. Kong is considered one of the all-time greats of table tennis and has now taken up position as Head Coach of China's National Women's Team. 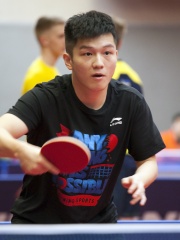 With an HPI of 37.22, Fan Zhendong is the 9th most famous Chinese Table Tennis Player.  Her biography has been translated into 25 different languages.

Fan Zhendong (Chinese: 樊振东; pinyin: Fán Zhèndōng; born 22 January 1997) is a Chinese professional table tennis player who is currently ranked world No. 1 for men's singles by the International Table Tennis Federation (ITTF). After joining the Chinese National Table Tennis Team in 2012 as the youngest member of the team, he went on to become the youngest ITTF World Tour Champion and the youngest World Table Tennis Champion. He achieved the top spot in the world rankings after holding position No. 2 for 29 consecutive months, starting from November 2015.Fan's attacking style of play involves explosive footwork and powerful forehand loops. His thick-set build has led fans and commentators to affectionately refer to him as "Little Fatty" (Chinese: 小胖; pinyin: Xiǎo Pàng). His continuous rise to becoming one of the top table tennis players in the world has garnered him a large fanbase worldwide, with over half a million followers on Chinese social media site Weibo. In 2016, he won the ITTF Star Point Award, and he was nominated for the Best Male Star Award every year between 2013 and 2016. 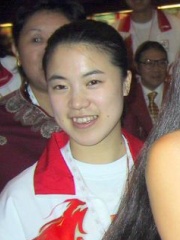 With an HPI of 36.93, Wang Nan is the 10th most famous Chinese Table Tennis Player.  Her biography has been translated into 22 different languages.

Wang Nan (Chinese: 王楠; pinyin: Wáng Nán; born October 23, 1978 in Fushun, Liaoning) is a female Chinese table tennis player from Liaoning. Wang remained as world #1 on the ITTF ranking system from January, 1999 to November, 2002. She is left-handed, and began playing table tennis when she was seven years old. Her particular skills are changing the placement of the ball during rallies and her loop drive, as well as her notable speed. Wang has been the leader of the women's table-tennis team of China after Deng Yaping's retirement. In terms of achievements, she is one of the most successful female table tennis players (alongside Li Xiaoxia, Deng Yaping, Ding Ning, Zhang Yining) having won the gold medal in each of the Table Tennis World Cup, the Table Tennis World Championships, and the Olympic Games.