This page contains a list of the greatest Jamaican Soccer Players. The pantheon dataset contains 16,880 Soccer Players, 23 of which were born in Jamaica. This makes Jamaica the birth place of the 74th most number of Soccer Players behind Belarus and Panama. 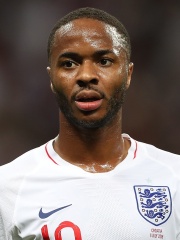 With an HPI of 46.89, Raheem Sterling is the most famous Jamaican Soccer Player.  His biography has been translated into 66 different languages on wikipedia.

Raheem Shaquille Sterling (born 8 December 1994) is a professional footballer who plays as a winger and attacking midfielder for Premier League club Chelsea and the England national team. Born in Jamaica to Jamaican parents, Sterling moved to London at the age of five. He began his career at Queens Park Rangers before signing for Liverpool in 2010. He was awarded the Golden Boy award in 2014. In July 2015, following a lengthy dispute over a new contract, he was signed by Manchester City in a transfer potentially worth £49 million, the highest transfer fee ever paid for an English player at the time. He went on to help Manchester City win back-to-back Premier League titles in the 2017–18 and 2018–19 seasons. In the 2018–19 season, he was named to the PFA Premier League Team of the Year and won the PFA Young Player of the Year and FWA Footballer of the Year. Sterling made his senior debut for England in November 2012 after previously being capped by England youth teams at under-16, under-17, under-19 and under-21 levels. He was chosen in England's squads for the FIFA World Cup in 2014, 2018 and 2022, and the UEFA European Championship in 2016 and 2020. 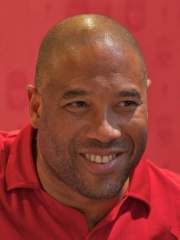 With an HPI of 43.93, John Barnes is the 2nd most famous Jamaican Soccer Player.  His biography has been translated into 34 different languages.

John Charles Bryan Barnes MBE (born 7 November 1963) is a former professional football player and manager. Often considered one of the greatest English players of all time, Barnes currently works as an author, as well as a commentator and pundit for ESPN and SuperSport. Initially a quick, skilful left winger, he moved to central midfield later in his career. Barnes won two league titles and two FA Cup finals with Liverpool. He was also an FA Cup runner-up with Watford, Liverpool and Newcastle United. He earned 79 international caps for England. Barnes was born and raised in Jamaica as the son of a military officer from Trinidad and Tobago and a Jamaican mother. He moved to London, England, with his family when he was 12 years old. He joined Watford aged 17 in 1981, before playing 296 competitive games for them, scoring 85 goals. He debuted for England in 1983, and in 1987 joined Liverpool for £900,000. In his ten seasons there, Liverpool won the then-top-flight First Division twice and the FA Cup twice. He scored 106 goals in 403 matches. By the time of his last cap, in 1995, he had more caps than any other black England player. After two years at Newcastle United, he ended his playing career at Charlton Athletic in 1999. Barnes had eight months as Celtic head coach when his former Liverpool manager Kenny Dalglish was director of football. He has since managed the Jamaica national team, in 2008–09, and English club Tranmere Rovers, for four months in 2009. Barnes was the PFA Players' Player of the Year once (in 1987–88) and the Football Writers' Association Footballer of the Year twice (in 1987–88 and 1989–90). In 2005, he was inducted into the English Football Hall of Fame. In 2006, in a poll of Liverpool fans' favourite players, Barnes came fifth; a year later, FourFourTwo magazine named him Liverpool's best all-time player. In 2016, The Times readers voted him England's greatest-ever left-footed player.Barnes has published two books: John Barnes: The Autobiography (1999), which was followed by The Uncomfortable Truth About Racism (2021), both of which were met with a largely positive reception. In 2022, he returned to Liverpool as an official Club Ambassador.

With an HPI of 37.85, Luther Blissett is the 3rd most famous Jamaican Soccer Player.  Her biography has been translated into 17 different languages.

Luther Loide Blissett (born 1 February 1958) is a former professional footballer and manager who played for the England national team during the 1980s. Born in Jamaica, Blissett played as a striker, and is best known for his time at Watford, whom he helped win promotion from the Fourth Division to the First Division. As of 2022, Blissett holds Watford's all-time records for appearances and goals, having played 503 games and scored 186 goals. Blissett's other clubs included A.C. Milan, who paid £1m for him in 1983 before selling him back to Watford for £550,000 in 1984, and AFC Bournemouth, for whom he had a goals-to-games ratio of nearly one goal in every two appearances. Blissett was capped 14 times by England, scoring a hat-trick on his debut. After retiring from playing, Blissett turned to coaching, initially under the management of Graham Taylor at Watford, and managed Chesham United from 2006 until 2007. Since the mid-1990s, Luther Blissett has frequently been used as a pseudonym, most notably by members of the Luther Blissett Project. 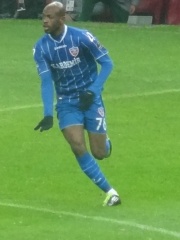 With an HPI of 35.12, Luton Shelton is the 4th most famous Jamaican Soccer Player.  His biography has been translated into 23 different languages.

Luton George Kieshawn Shelton (11 November 1985 – 22 January 2021) was a Jamaican professional footballer who played as a striker or winger. At the time of his death, he was the top scorer for the Jamaican national football team with 35 goals. He is also the only men's football player to score four goals in his international debut (2004). He earned 75 caps for Jamaica, and played at three CONCACAF Gold Cups. Shelton attended Wolmer's Schools and began his career in the youth system of Harbour View. In his international club career, he was part of championship sides in the 2006 Svenska Cupen and the 2008 Norwegian Cup. He also played in the UK, Denmark, Turkey, and Russia.

With an HPI of 32.89, Theodore Whitmore is the 5th most famous Jamaican Soccer Player.  His biography has been translated into 20 different languages. 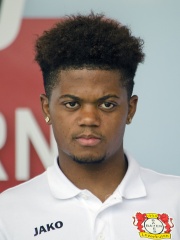 With an HPI of 31.39, Leon Bailey is the 6th most famous Jamaican Soccer Player.  His biography has been translated into 30 different languages.

Leon Patrick Bailey (born 9 August 1997) is a Jamaican professional footballer who plays as a winger for Premier League club Aston Villa and the Jamaica national team. Bailey arrived in Europe at the age of 13 and played for a number of clubs at youth level before being signed by Belgian side Genk in 2015, where he was named Belgian Young Footballer of the Year. His success in Belgium earned him a move to Bundesliga side Bayer Leverkusen in 2017. After four years at the club, he was signed by Aston Villa in 2021 for a fee of around £30 million.

With an HPI of 31.02, Musashi Suzuki is the 7th most famous Jamaican Soccer Player.  His biography has been translated into 41 different languages.

Musashi Suzuki (鈴木 武蔵, Suzuki Musashi, born 11 February 1994) is a Japanese professional footballer who plays for Gamba Osaka in the J1 League. He is mainly deployed as a forward. 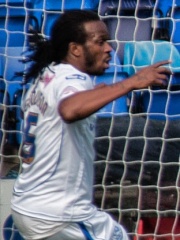 With an HPI of 29.84, Ian Goodison is the 8th most famous Jamaican Soccer Player.  His biography has been translated into 18 different languages.

Ian De Souza Goodison (born 21 November 1972) is a Jamaican former professional footballer who played as a defender. He spent most of his career at English side Tranmere Rovers.

With an HPI of 26.17, Ricardo Gardner is the 9th most famous Jamaican Soccer Player.  His biography has been translated into 29 different languages.

Ricardo Wayne Gardner (born 25 September 1978), commonly known as Bibi, is a Jamaican former professional footballer. He works as assistant coach at Portmore United. A left winger, he could also play in the centre of midfield or at left wingback. He last played for Bolton Wanderers in May 2012, completing a 14-year spell at the club, of which 11 were spent in the Premier League. Gardner earned 111 caps for the Jamaica national football team, scoring 9 goals and playing at four CONCACAF Gold Cups and the 1998 FIFA World Cup. 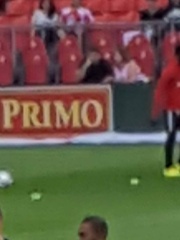 With an HPI of 26.16, Robin Fraser is the 10th most famous Jamaican Soccer Player.  His biography has been translated into 15 different languages.

Robin Fraser (born December 17, 1966) is an American soccer coach and former player. He is currently the head coach of Major League Soccer club Colorado Rapids. Fraser was formerly an assistant coach for Real Salt Lake, New York Red Bulls, and Toronto FC, and was the head coach of Chivas USA for two seasons. Fraser played six seasons in the American Professional Soccer League and ten in Major League Soccer. He earned 27 caps with the United States men's national soccer team between 1988 and 2001.