This page contains a list of the greatest Iranian Soccer Players. The pantheon dataset contains 16,880 Soccer Players, 79 of which were born in Iran. This makes Iran the birth place of the 42nd most number of Soccer Players behind Ghana and Côte d'Ivoire. 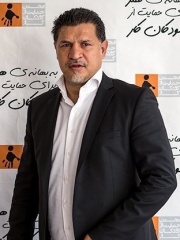 With an HPI of 58.36, Ali Daei is the most famous Iranian Soccer Player.  His biography has been translated into 42 different languages on wikipedia.

Ali Daei (Persian: علی دایی pronounced [ʔæliː dɑːjiː]; born 21 March 1969) is an Iranian football manager and former player. A striker, he was the captain of the Iranian national team between 2000 and 2006 and played in the German Bundesliga for Arminia Bielefeld, Bayern Munich and Hertha Berlin. He is regarded as one of the greatest Asian footballers of all time.A tall forward, Daei was a prolific goalscorer and was known for his heading accuracy and ability in the air. He was the world's top international goalscorer with 109 goals, until his record was broken by Cristiano Ronaldo in 2021. During his playing career, Daei was appointed a UNICEF Goodwill Ambassador in 2001. Following his retirement, Daei served as a member of the FIFA Football Committee between 2007 and 2013. In 2014, he was inducted into the Asian Football Hall of Fame. 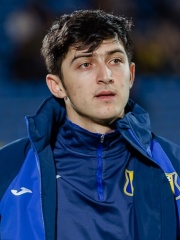 With an HPI of 47.06, Sardar Azmoun is the 2nd most famous Iranian Soccer Player.  His biography has been translated into 41 different languages.

Sardar Azmoun (Persian: سردار آزمون; born 1 January 1995) is an Iranian professional footballer who plays as a forward for Bundesliga club Bayer Leverkusen and the Iran national team. Azmoun made his debut for the Iran national team in 2014 aged 19. He has been a regular with Team Melli playing in the 2015 and 2019 AFC Asian Cup as well as the 2018 FIFA World Cup. After Alireza Jahanbakhsh, Azmoun is the second-most expensive Iranian player of all-time. He is the youngest Iranian to score in a UEFA Champions League game. 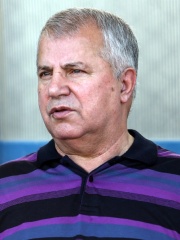 With an HPI of 45.50, Ali Parvin is the 3rd most famous Iranian Soccer Player.  His biography has been translated into 17 different languages.

Ali Parvin (Persian: علی پروين; born 25 September 1946) is a retired Iranian football player and coach. He is regarded as one of the most prominent Iranian footballers. During his career, he has been associated mainly with Persepolis, played for the team for eighteen years, managed the club for seventeen years in three occasions and was also the club's president. He was selected as one of the seventeen Asian football elites by AFC and received a statue from this confederation. He was named as one of the members of Persepolis Hall of Fame and the club thanked him for his great performance during his senior career at Persepolis. The club gave him a statue of his face and named him as one of the twelve great players of Persepolis in the 1970s. 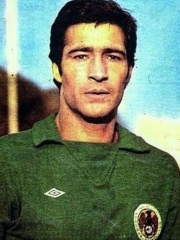 With an HPI of 44.97, Nasser Hejazi is the 4th most famous Iranian Soccer Player.  His biography has been translated into 19 different languages.

Nasser Hejazi (Persian: ناصر حجازی nāser hejāzi; 14 December 1949 – 23 May 2011), nicknamed "the legendary Iranian goalkeeper", was an Iranian football player and coach who most notably played for Esteghlal (Taj). Considered as the best goalkeeper in the history of Iranian football and Asia, he was capped 62 times for the Iran national football team. In 2000, the Asian Football Confederation ranked him the second best Asian goalkeeper of the 20th century.He was goalkeeper of Iran national team in the 1960s and 1970s and won the AFC Asian Cup on two occasions in 1972 and 1976, and Asian Games title once, and competed in the 1972 Munich Olympics and 1976 Montreal Olympics and 1978 FIFA World Cup. As a manager, he won an Azadegan League in 1998 and a Bangladesh League in 1988, as well as a runner-up place in 1998–99 AFC Champions League. 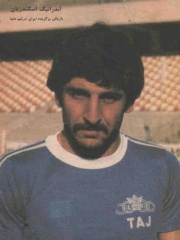 With an HPI of 43.51, Andranik Eskandarian is the 5th most famous Iranian Soccer Player.  His biography has been translated into 20 different languages.

Andranik Eskandarian (Armenian: Անդրանիկ Իսքանտարեան, Persian: آندرانیک اسکندریان, born 31 December 1951) is an Iranian former footballer. He played as a defender for the F.C. Ararat Tehran, Taj SC and New York Cosmos of the North American Soccer League. He won the Iranian league in 1975 and reached the second place in 1974. Further he won the Hazfi Cup in 1977. He played six years for Taj SC. Taj's fans called him Barbed Wire. Eskandarian was a member of the Iranian team winning the Asia Cup 1976 in Tehran and reaching the quarterfinals of the Olympic Tournament in Montreal in 1976. He also played for Iran in the 1978 World Cup, the country's first appearance in the tournament. He infamously was the first member of Iran's team to score in the World Cup: an own-goal in a match against Scotland that his teammate later tied, 1-1. The game was still considered a success for Iran, including Eskandarian's play as a defender against Kenny Dalglish and Joe Jordan, and an embarrassment for Scotland.Soon after that, he moved to America to play for the highest-profile team in the country, the New York Cosmos, beginning in the 1979 season. After the Cosmos folded in 1984, Eskandarian played for the New York Express during its half-season in the Major Indoor Soccer League. From 1989 through 1990, he played for the New Jersey Eagles of the American Soccer League. 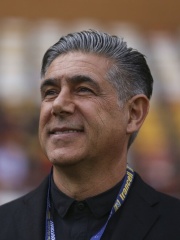 With an HPI of 42.68, Afshin Ghotbi is the 6th most famous Iranian Soccer Player.  His biography has been translated into 27 different languages. 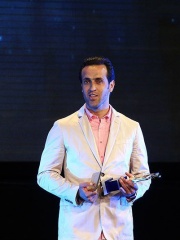 With an HPI of 42.49, Ali Karimi is the 7th most famous Iranian Soccer Player.  His biography has been translated into 33 different languages.

Ali Karimi (Persian: علی کریمی Persian: [ɑli kæriˈmi] (listen); born 8 November 1978) is an Iranian football coach and former player. During his professional football career, he has played in the Iran Pro League, UAE Pro League, Qatar Stars League and Bundesliga. Karimi has scored 38 goals in 127 matches for the Iran national team. In 2004, he was recognized as the best scorer of the AFC Asian Cup and received the Asian Footballer of the Year award in the same year. He announced his retirement at the end of the 2013–14 season and, on 11 April 2014, played the final game of his 18-year career.Karimi's professional career began with Fath Tehran, where he made his first-team debut in 1996 aged 18. He then played three seasons with Persepolis, winning the Iranian league twice and the Hazfi Cup once with the club. In July 2001, Karimi signed a two-year contract with UAE Pro League club Al-Ahli Dubai. While an Al-Ahli player, Karimi won two cup titles, and was the top-goalscorer in the 2003–04 season, an impressive feat for a midfielder. After leaving the club in 2005 aged 26, Karimi made a long-awaited move to Europe to play for Bayern Munich. At the club he had relative success, winning both the Bundesliga and the DFB-Pokal in 2005–06 season. Later in his career, he rejoined former coach Felix Magath and won a second German Cup with Schalke 04. Karimi ended his playing career in Iran with Persepolis and Tractor Sazi, and with the latter won the Hazfi Cup in the final season of his career. In international football, Karimi made his Iran debut on 13 October 1998, at the age of 19. He made 127 career appearances in total, appearing at five major tournaments including 1998 Asian Games, 2000, 2004, and 2007 Asian Cups and 2006 FIFA World Cup. Renowned for his on-the-ball skill, dribbling runs and playmaking ability, he was often referred to as the Asian Maradona‏ and The Magician. In the video introducing Iran's national football team in the 2018 World Cup, by FIFA, he was described as "One of the top 2 players of Iran's football history". He is regarded as one of the greatest Asian footballers of all time.‏ In 2017, AFC named Karimi as "one of the icons of Asian football history".Karimi is known as one of the most popular athletes in the history of Iran. In April 2015, he was recognized as Iran's most popular football player (from 1991 to 2015) in a poll by Navad television program. 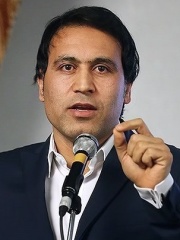 With an HPI of 41.51, Mehdi Mahdavikia is the 8th most famous Iranian Soccer Player.  His biography has been translated into 31 different languages.

Mehdi Mahdavikia (Persian: مهدی مهدوی‌کیا ; born 24 July 1977) is an Iranian professional football coach and former player usually played as a right winger or right back. He is currently under contract by Hamburger SV as a youth coach, and also manages his own youth academy, FC KIA. Mahdavikia currently represents Asian Football Confederation (AFC) in the Football Advisory Panel of International Football Association Board (IFAB), joining the body in 2019. On 15 May 2013, Mahdavikia was appointed as AFC Grassroots Ambassador.During his playing career, Mahdavikia internationally represented Iranian national team, which he captained from 2006 to 2009, and currently is the fourth most capped player of all-time. He played for Iranian clubs Bank Melli, Persepolis, Steel Azin and Damash Gilan, as well as German clubs VfL Bochum, Hamburger SV and Eintracht Frankfurt, spending 12 consecutive seasons in Bundesliga. He won the Asian Young Footballer of the Year award in 1997 as well as the Asian Footballer of the Year award in 2003. He was known for his crossing, speed and dribbling. 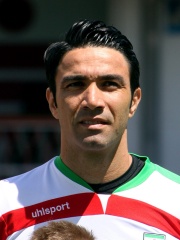 With an HPI of 40.11, Javad Nekounam is the 9th most famous Iranian Soccer Player.  His biography has been translated into 37 different languages.

Javad Nekounam (Persian: جواد نکونام; born 7 September 1980) is an Iranian retired professional footballer who played as a central midfielder and is the current manager of Foolad FC. He spent most of his professional career with Pas and Spain's Osasuna, appearing in 197 official games and scoring 31 goals over his two spells with the latter club and also being team captain. He also competed in the United Arab Emirates, Kuwait and Qatar, in 18 seasons as a senior. Nicknamed Neku, and widely regarded as one of Asia's greatest footballers, Nekounam represented the Iran national team a record of 148 times, playing several major tournaments including two World Cups and four Asian Cups. 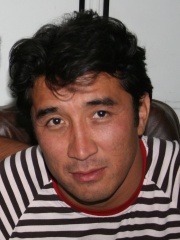 With an HPI of 39.53, Khodadad Azizi is the 10th most famous Iranian Soccer Player.  His biography has been translated into 22 different languages.

Khodadad Azizi (Persian: خداداد عزیزی; born 22 June 1971) is an Iranian football coach and former player who played as a striker.