The following people are considered by Pantheon to be the most legendary Soccer Players of all time. This list of famous Soccer Players is sorted by HPI (Historical Popularity Index), a metric that aggregates information on a biography’s online popularity. 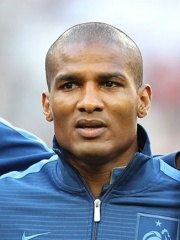 With an HPI of 64.08, Florent Malouda is the most famous Soccer Player.  His biography has been translated into 56 different languages on wikipedia.

Florent Johan Malouda (born 13 June 1980) is a French football coach and former professional player. A left winger, he spent most of his career at Lyon and Chelsea, winning four consecutive Ligue 1 titles with the former and the UEFA Champions League in 2012 with the latter, among other honours. A France international from 2004 to 2012, Malouda represented Les Bleus on 80 occasions, including in two FIFA World Cups and two European Championships. He was part of the French team which reached the 2006 World Cup final. In 2017, he played for his home nation French Guiana. 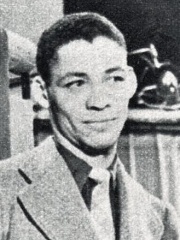 With an HPI of 60.43, Raoul Diagne is the 2nd most famous Soccer Player.  His biography has been translated into 18 different languages.

Raoul Diagne (10 November 1910 – 12 November 2002) was a French footballer who played defender professionally in France and for the French national football team. He worked as a coach after his playing career. Born in Saint-Laurent-du-Maroni French Guiana, Diagne, son of politician Blaise Diagne, was raised in Paris. The young Diagne was a brilliant student, but his passion for football was much stronger than that for studying, despite pressure from his father. Initially cut by French professional football team Stade Français, Raoul Diagne signed at the age of 16 with Racing Club de Paris. A tall, elegant, and versatile defender who was excellent in the air, Diagne was the first black player to be selected for the France national football team. He earned 18 caps with the national team. The French press nicknamed Diagne the “Black Spider”, given his impressive height (1.87 m) and limb reach. Playing in Paris, Diagne was close to the star Josephine Baker, who affectionately called him "my little brother.” He was a prominent figure in the "black Paris" of the time, alongside boxer Panama Al Brown. Raoul Diagne could play any position on the field, goalkeeper included. Despite his imposing size and his primary role as a defender, his preferred position was as a right wing. It was as a very offensive-minded right back defender that he made his career in the French team. In fact, it was not uncommon to see Raoul exchange his position with the actual right winger in order to seek a result at the end of the game. At the end of the 1940s, after finishing his playing career in Toulouse (until 1942), Annecy (1942-1945) and Nice (1945-1947), he obtained his coaching diplomas and practiced in Belgium, Algeria, and Normandy. Of Senegalese descent, in the early 1960s Diagne became the first coach of the Senegal national football team.Raoul Diagne died on November 12, 2002 in Créteil, a southeastern suburb of the Paris metropolitan area. The "Black Spider" was 92 years old and French football mourned the loss of a star and pioneer.

With an HPI of 52.02, Claude Dambury is the 3rd most famous Soccer Player.  His biography has been translated into 39 different languages. 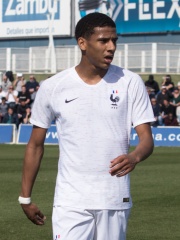 With an HPI of 51.18, Jean-Clair Todibo is the 4th most famous Soccer Player.  His biography has been translated into 31 different languages.

Jean-Clair Dimitri Roger Todibo (born 30 December 1999) is a French professional footballer who plays as a centre-back for Ligue 1 club Nice. 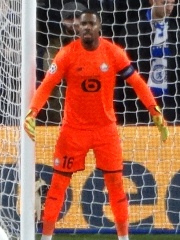 With an HPI of 44.50, Mike Maignan is the 5th most famous Soccer Player.  Her biography has been translated into 17 different languages.

Mike Peterson Maignan (born 3 July 1995) is a French professional footballer who plays as a goalkeeper for Serie A club AC Milan and the France national team. Maignan came through the youth teams at Paris Saint-Germain, he was an unused substitute several times but never played. In 2015 he joined Lille for €1 million, and became their first-choice in 2017. He was voted Ligue 1's goalkeeper of the year in 2018–19, and won the league title in 2020–21. 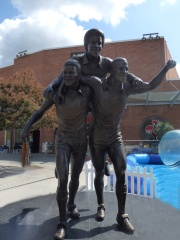 With an HPI of 44.39, Cyrille Regis is the 6th most famous Soccer Player.  His biography has been translated into 16 different languages.

Cyrille Regis, MBE (9 February 1958 – 14 January 2018) was an English professional footballer who played as a forward. His professional playing career spanned 19 years, where he made 614 league appearances and scored 158 league goals, most prolifically at West Bromwich Albion and Coventry City. Regis also won five caps with the England national team. 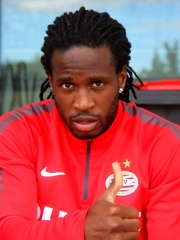 With an HPI of 41.66, Florian Jozefzoon is the 7th most famous Soccer Player.  His biography has been translated into 15 different languages.

Florian Marc Jozefzoon (born 9 February 1991) is a professional footballer who plays as a winger for Ligue 2 club Quevilly-Rouen and the Suriname national team. He is a product of the Ajax Youth Academy and won 10 caps for the Netherlands at youth level. He has also won the Eredivisie with PSV Eindhoven in 2014–15 and 2015–16. 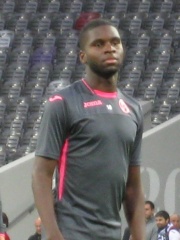 With an HPI of 40.42, Odsonne Édouard is the 8th most famous Soccer Player.  His biography has been translated into 22 different languages.

Odsonne Édouard (born 16 January 1998) is a French professional footballer who plays as a forward for Premier League club Crystal Palace. Having progressed through the youth ranks of AF Bobigny, Édouard signed with Paris Saint-Germain in July 2011 before being loaned to fellow Ligue 1 side Toulouse for the 2016–17 season. The following season, he was loaned to Celtic, where he won the domestic treble, before joining them on a permanent move for a club record fee. He has also represented France at various youth levels and was a key player for the country at the 2015 UEFA European Under-17 Championship, where he won both the Golden Player and Golden Boot awards.