This page contains a list of the greatest Skiers. The pantheon dataset contains 541 Skiers, 23 of which were born in Slovenia. This makes Slovenia the birth place of the 11th most number of Skiers behind United States and Italy.

The following people are considered by Pantheon to be the top 10 most legendary Skiers of all time. This list of famous Skiers is sorted by HPI (Historical Popularity Index), a metric that aggregates information on a biography’s online popularity. Visit the rankings page to view the entire list of Skiers.

With an HPI of 48.59, Bojan Križaj is the most famous Skier.  His biography has been translated into 17 different languages on wikipedia.

Bojan Križaj (listen ) (born 3 January 1957) is a Slovenian, back then Yugoslavian, former alpine skier. During his international career he competed for the then-existing Yugoslavia. He competed at three Winter Olympics. 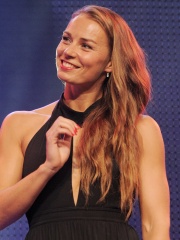 With an HPI of 47.08, Tina Maze is the 2nd most famous Skier.  Her biography has been translated into 43 different languages.

Tina Maze (Slovene: [ˈtiːna ˈmaːzɛ]; born 2 May 1983) is a retired Slovenian World Cup alpine ski racer. Maze is the most successful Slovenian ski racer in history with a career that culminated with two gold medals at the 2014 Winter Olympics. She was awarded the title of the Slovenian Sportswoman of the Year in 2005, 2010, 2011, 2013, 2014 and 2015, and with her four medals she is the most decorated Slovenian athlete at the Winter Olympics.Maze started her career as a giant slalom specialist, but later competed in all five alpine skiing disciplines. She is one of seven female racers who has won in all five World Cup disciplines and one of three to do so in a single season. Maze is the 2014 Olympic champion in downhill and giant slalom and the 2015 world champion in downhill and combined. She was also the world champion in giant slalom in 2011 and super-G in 2013. Maze won a total of 26 World Cup races during her career, and won the World Cup overall title in 2013. In that season, she won 11 races and tallied a record number of World Cup points – 2414, beating the previous record of Hermann Maier of 2000 points from the 2000 season. She also won the super-G and giant slalom titles, and finished first in the combined event (although no globe was awarded) and finished second in slalom and downhill. Maze also improved Maier's previous record of podium finishes in a single season (22) with 24 podiums. 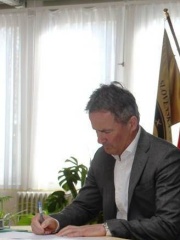 With an HPI of 44.97, Primož Ulaga is the 3rd most famous Skier.  His biography has been translated into 19 different languages.

With an HPI of 43.65, Jure Franko is the 4th most famous Skier.  His biography has been translated into 17 different languages.

Jure Franko (listen ) (born 28 March 1962 in Nova Gorica) is a Slovenian-Yugoslav former alpine skier, best known for winning a giant slalom silver medal at the 1984 Winter Olympics in Sarajevo. Jure Franko was born and raised in Nova Gorica, a city in Slovenia at the border with Italy. Franko competed in giant slalom and super giant slalom events, and reached the peak of his skiing career in the 1983–84 season. On 14 February 1984, at the 1984 Winter Olympics in Sarajevo, he won a silver medal in giant slalom. This was the first Winter Olympics medal ever for Yugoslavia. Franko was at the 4th position after the first leg of the giant slalom, and delivered the fastest time of the second leg, bringing him to second place overall (Max Julen from Switzerland took gold). Franko also competed in the World Cup competitions, where he placed himself 3rd three times. In addition, he achieved 23 top ten positions, and 11 additional top 15 positions. He quit skiing after the 1984–85 season. In January 2006, Jure Franko participated in the 2006 Winter Olympic torch relay, by relaying the torch from Slovenia to Italy at the Slovenian-Italian border in Nova Gorica. He also organised a trip for 43 children of modest economic backgrounds from Sarajevo, Nova Gorica and Gorizia to visit the giant slalom event at the 2006 Winter Olympic games in Turin, Italy. He is the "Honorary Citizen of Sarajevo", an honor bestowed upon Slovenian skier by the City Council of Sarajevo at the session held on 30 September 2020.Jure is sometimes confused with Jurij Franko, designer of the Elan SCX ski. The two attended the same school during the 1970s.

With an HPI of 42.83, Miran Tepeš is the 5th most famous Skier.  His biography has been translated into 18 different languages.

Miran Tepeš (born 25 April 1961) is a Slovenian former ski jumper and current ski jumping official who competed for Yugoslavia from 1979 to 1992. He won a silver medal in the team large hill competition at the 1988 Winter Olympics in Calgary. His best finish at the FIS Ski Jumping World Cup was 2nd a total of seven times between 1985 and 1990. After retiring, Tepeš started working as a FIS competition official. His son Jurij Tepeš and daughter Anja Tepeš are also ski jumpers. Miran Tepeš is also a passionate sailor, who has circumnavigated the world 2 times with his own sailing boat "Skokica". His first trip around the world was between the years 2006 and 2008, his second trip (including Cape Horn) started in 2010 and was finished in autumn 2012.

With an HPI of 42.60, Rok Petrovič is the 6th most famous Skier.  His biography has been translated into 15 different languages.

Rok Petrovič listen (5 February 1966 – 16 September 1993) was a Yugoslav and Slovenian alpine skier. Petrovič was born in Ljubljana, Yugoslavia, the son of Zdenka Steiner and Krešimir Petrović, a well known sports psychologist of Croatian origin. His first success in alpine ski racing was the 1983 Junior World Championship slalom title in Sestriere, Italy. After this he rapidly advanced up the world slalom rankings. In the 1985–86 Alpine Skiing World Cup season, he was practically unbeatable in slalom, his competition left to wait for rare mistakes in his highly aggressive and innovative skiing style. That season he won 5 races, is second in St. Anton, Austria and third in Geilo, Norway, easily winning the World Cup slalom title and becoming the first Yugoslav with a crystal globe. After his championship-winning season, Petrovič was unable to recapture his winning form, the only hint of his championship season being a second place behind his teammate Bojan Križaj at the unforgettable race in Kranjska Gora next season. He finished eighth in the 1988 Winter Olympic Games giant slalom. Due to his lack of winning results, he quit skiing in 1988 and began studies at the College of Sports in Ljubljana. He graduated in 1991 and continued with post-graduate study. He was to defend his M.Sc. thesis in the autumn of 1993, but shortly before defending his thesis he took a short break at the Croatian island Korčula and drowned in a diving accident. Altogether he won 5 World Cup races, all in slalom and all in his champion season in 1985-86: 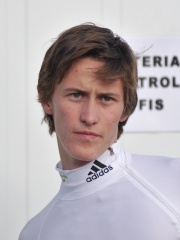 With an HPI of 41.47, Peter Prevc is the 7th most famous Skier.  His biography has been translated into 35 different languages.

Peter Prevc (Slovene: [ˈpéːtəɾ ˈpɾéːwts]; born 20 September 1992) is a Slovenian ski jumper. He won the 2016 Ski Jumping World Cup overall title and four Olympic medals, including gold at the 2022 Winter Olympics in the mixed team event. He also won the 2016 Four Hills Tournament and 2016 Ski Flying World Championships, three consecutive Ski Flying World Cup overall titles (2014, 2015, and 2016), silver and bronze medals at the 2013 Ski Jumping World Championships, bronze at the 2014 Ski Flying World Championships, and bronze and silver with the Slovenian national team at the 2011 Ski Jumping and 2018 Ski Flying World Championships, respectively. A specialist in ski flying, Prevc is a former world record holder and the first athlete in history to land a jump of 250 metres (820 ft), which remains the Slovenian national distance record. In 2015, in Planica, Prevc became one of the few ski jumpers in history to achieve a "perfect jump", with all five judges awarding him the maximum style points of 20. In the following year, Prevc achieved the most individual World Cup competition wins in a single season – 15 – which is also a record.Prevc was named Slovenian Sportsman of the Year for four consecutive years between 2013 and 2016. In March 2016, he was voted Athlete of the Month by the United States Sports Academy, and also ranked third in the Athlete of the Year voting for 2016.

With an HPI of 40.10, Mateja Svet is the 8th most famous Skier.  Her biography has been translated into 18 different languages.

Mateja Svet (pronunciation ); born 16 August 1968) is a former Slovenian alpine skier, who competed for Yugoslavia from 1984 to 1990. Svet was born in Ljubljana, Socialist Republic of Slovenia, Yugoslavia. Making her first appearance in the 1983/1984 season, she won the first Yugoslav female skiing victory in February 1986. Svet won the World Cup giant slalom title in the 1987/1988 season, won silver medal in giant slalom in the 1988 Winter Olympics in Calgary, won three medals in 1987 World Championship in Crans-Montana (bronze in slalom and super G, silver in giant slalom) and two medals in 1989 World Championship in Vail – gold in slalom, later when the bronze Christelle Guignard was disqualified due to doping, also bronze in giant slalom. In her rather short career – she quit at the age of 21 due to disagreements with the Ski Association of Yugoslavia – she achieved seven World cup victories, 22 World Cup podiums and 54 World Cup top tens. From 1985 until 1990 she qualified no lower than 7th in the overall World Cup standings. 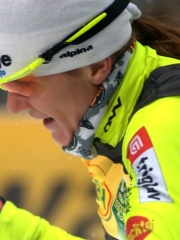 With an HPI of 40.01, Petra Majdič is the 9th most famous Skier.  Her biography has been translated into 25 different languages.

Petra Majdič (born 22 December 1979) is a Slovenian former cross-country skier. Her best results came in classic style races. She won twenty-four World Cup races, twenty in sprint races, but she also won a marathon (30 km race) in Trondheim in 2009. She is the first Slovenian cross-country skier to win a World Cup race, the first to get a medal at the World Championships and the first to get an Olympic medal. With 20 wins, Majdič is the second-most successful sprinter in FIS Cross-Country World Cup history and with 24 wins in total she's the fourth-most successful World Cup competitor of all time. 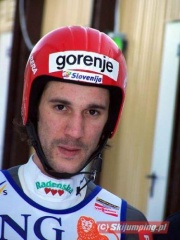 With an HPI of 39.49, Primož Peterka is the 10th most famous Skier.  His biography has been translated into 22 different languages.

Primož Peterka (Slovene pronunciation: [ˈpriːmɔʃ ˈpeːtərka] (listen)) is a Slovenian former ski jumper who competed from 1996 to 2011. He is one of the most successful athletes from Slovenia, having won fifteen individual World Cup competitions, two consecutive overall World Cup titles, a Ski Flying World Cup title, and the Four Hills Tournament.

Pantheon has 34 people classified as skiers born between 1957 and 2000. Of these 34, 33 (97.06%) of them are still alive today. The most famous living skiers include Bojan Križaj, Tina Maze, and Primož Ulaga. The most famous deceased skiers include Rok Petrovič. As of April 2022, 11 new skiers have been added to Pantheon including Matjaž Debelak, Matjaž Zupan, and Urša Bogataj.