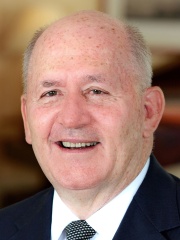 With an HPI of 61.21, Peter Cosgrove is the most famous Australian Military Personnel.  His biography has been translated into 34 different languages on wikipedia.

General Sir Peter John Cosgrove, (born 28 July 1947) is a retired senior Australian Army officer who served as the 26th Governor-General of Australia, in office from 2014 to 2019. A graduate of the Royal Military College, Duntroon, Cosgrove fought in the Vietnam War, receiving the Military Cross in 1971. From 1983 to 1984, he was commander of the 1st Battalion, Royal Australian Regiment, and he later served as commander of the 6th Brigade and the 1st Division. Cosgrove rose to prominence in 1999, when he served as commander of the International Force for East Timor (INTERFET), which oversaw the peacekeeping mission in East Timor during its transition to independence. Cosgrove was Australia's Chief of Army from 2000 to 2002 and Chief of the Defence Force from 2002 to 2005, receiving corresponding promotions to lieutenant general and general. Cosgrove retired from active service following the end of his term as Chief of the Defence Force, and subsequently served as leader of a taskforce helping to rebuild communities in Queensland after Cyclone Larry in 2006. In January 2014, Cosgrove was named to succeed Dame Quentin Bryce as Governor-General of Australia. He was sworn in on 28 March 2014, made a Knight of the Order of Australia on the same date. Cosgrove retired on 1 July 2019 and was succeeded by General David Hurley. 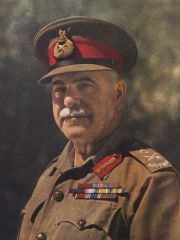 With an HPI of 52.85, Thomas Blamey is the 2nd most famous Australian Military Personnel.  His biography has been translated into 15 different languages.

Field Marshal Sir Thomas Albert Blamey, (24 January 1884 – 27 May 1951) was an Australian general of the First and Second World Wars, and the only Australian to attain the rank of field marshal. Blamey joined the Australian Army as a regular soldier in 1906, and attended the Staff College at Quetta. During the First World War he participated in the landing at Anzac Cove on 25 April 1915, and served as a staff officer in the Gallipoli Campaign, where he was mentioned in despatches for a daring raid behind enemy lines. He later served on the Western Front, where he distinguished himself in the planning for the Battle of Pozières. He rose to the rank of brigadier general, and served as chief of staff of the Australian Corps under Lieutenant General Sir John Monash, who credited him as a factor in the Corps' success in the Battle of Hamel, the Battle of Amiens and the Battle of the Hindenburg Line. After the war Blamey was Deputy Chief of the General Staff, and was involved in the creation of the Royal Australian Air Force. He resigned from the regular Army in 1925 to become Chief Commissioner of the Victoria Police, but remained in the Militia, rising to command the 3rd Division in 1931. Around this time, he was leader of the clandestine far-right group, the League of National Security, also known as the White Army. As chief commissioner, Blamey set about dealing with the grievances that had led to the 1923 Victorian Police strike, and implemented innovations such as police dogs and equipping vehicles with radios. His tenure as chief commissioner was marred by a scandal in which his police badge was found in a brothel, and a later attempt to cover up the shooting of a police officer led to his forced resignation in 1936. He later made weekly broadcasts on international affairs on Melbourne radio station 3UZ. Appointed chairman of the Commonwealth Government's Manpower Committee and controller general of recruiting in 1938, he headed a successful recruiting campaign which doubled the size of the part-time volunteer Militia. During the Second World War Blamey commanded the Second Australian Imperial Force and the I Corps in the Middle East. In the latter role he commanded Australian and Commonwealth troops in the disastrous Battle of Greece. In the former role, he attempted to protect Australian interests against British commanders who sought to disperse his forces on all manner of missions. He was appointed deputy commander-in-chief of Middle East Command, and was promoted to general in 1941. In 1942, he returned to Australia as commander-in-chief of the Australian Military Forces and commander of Allied Land Forces in the South West Pacific Area under the command of General Douglas MacArthur. On the orders of MacArthur and Prime Minister John Curtin, he assumed personal command of New Guinea Force during the Kokoda Track campaign, and relieved Lieutenant General Sydney Rowell and Major General Arthur Allen under controversial circumstances. Blamey also planned and carried out the significant and victorious Salamaua–Lae Campaign. Nonetheless, during the final campaigns of the war he faced vociferous criticism of the Army's performance. He signed the Japanese Instrument of Surrender on behalf of Australia at Japan's ceremonial surrender in Tokyo Bay on 2 September 1945, and later personally accepted the Japanese surrender at Morotai on 9 September. He was promoted to field marshal in June 1950.