This page contains a list of the greatest Iranian Film Directors. The pantheon dataset contains 1,580 Film Directors, 13 of which were born in Iran. This makes Iran the birth place of the 20th most number of Film Directors behind Sweden and China. 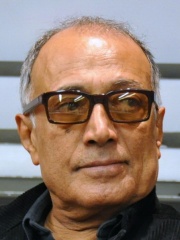 With an HPI of 74.76, Abbas Kiarostami is the most famous Iranian Film Director.  His biography has been translated into 54 different languages on wikipedia.

Abbas Kiarostami (Persian: عباس کیارستمی‎ [ʔæbˌbɒːs kijɒːɾostæˈmi] (listen); 22 June 1940 – 4 July 2016) was an Iranian film director, screenwriter, poet, photographer, and film producer. An active film-maker from 1970, Kiarostami had been involved in the production of over forty films, including shorts and documentaries. Kiarostami attained critical acclaim for directing the Koker trilogy (1987–1994), Close-Up (1990), The Wind Will Carry Us (1999), and Taste of Cherry (1997), which was awarded the Palme d'Or at the Cannes Film Festival that year. In later works, Certified Copy (2010) and Like Someone in Love (2012), he filmed for the first time outside Iran: in Italy and Japan, respectively. His films Where Is the Friend’s Home?, Close-Up, and The Wind Will Carry Us were ranked among the 100 best foreign films in a 2018 critics' poll by BBC Culture. Close-Up was also ranked one of the 50 greatest movies of all time in the famous decennial Sight & Sound poll conducted in 2012.Kiarostami had worked extensively as a screenwriter, film editor, art director, and producer and had designed credit titles and publicity material. He was also a poet, photographer, painter, illustrator, and graphic designer. He was part of a generation of filmmakers in the Iranian New Wave, a Persian cinema movement that started in the late 1960s and emphasised the use of poetic dialogue and allegorical storytelling dealing with political and philosophical issues.Kiarostami had a reputation for using child protagonists, for documentary-style narrative films, for stories that take place in rural villages, and for conversations that unfold inside cars, using stationary mounted cameras. He is also known for his use of Persian poetry in the dialogue, titles, and themes of his films. Kiarostami's films contain a notable degree of ambiguity, an unusual mixture of simplicity and complexity, and often a mix of fictional and documentary elements. The concepts of change and continuity, in addition to the themes of life and death, play a major role in Kiarostami's works. 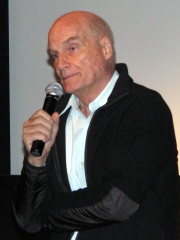 With an HPI of 67.04, Barbet Schroeder is the 2nd most famous Iranian Film Director.  His biography has been translated into 26 different languages.

Barbet Schroeder (born 26 August 1941) is an Iranian-born Swiss film director and producer who started his career in French cinema in the 1960s, working with directors such as Jean-Luc Godard and Jacques Rivette. Since the late 1980s, he has directed many big budget Hollywood films, often mixing melodrama with the thriller genre in films like Single White Female, Kiss of Death, and Murder by Numbers. He has been nominated for the Palme d'Or for his 1987 film Barfly. 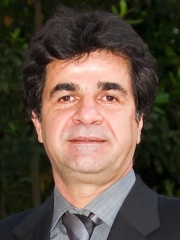 With an HPI of 64.40, Jafar Panahi is the 3rd most famous Iranian Film Director.  His biography has been translated into 45 different languages.

Jafar Panâhi (Persian: جعفر پناهی‎, [d͡ʒæˈfæɾ pæˈnɒːhiː]; born 11 July 1960) is an Iranian film director, screenwriter, and film editor, commonly associated with the Iranian New Wave film movement. After several years of making short films and working as an assistant director for fellow Iranian filmmaker Abbas Kiarostami, Panahi achieved international recognition with his feature film debut, The White Balloon (1995). The film won the Caméra d'Or at the 1995 Cannes Film Festival, the first major award an Iranian film won at Cannes. Panahi was quickly recognized as one of Iran's most influential filmmakers. His films were often banned in Iran, but he continued to receive international acclaim from film theorists and critics and won numerous awards, including the Golden Leopard at the Locarno International Film Festival for The Mirror (1997), the Golden Lion at the Venice Film Festival for The Circle (2000), and the Silver Bear at the Berlin Film Festival for Offside (2006). His films are known for their humanistic perspective on life in Iran, often focusing on the hardships of children, the impoverished, and women. Hamid Dabashi has written, "Panahi does not do as he is told—in fact he has made a successful career in not doing as he is told."After several years of conflict with the Iranian government over the content of his films (including several short-term arrests), Panahi was arrested in March 2010 along with his wife, daughter, and 15 friends, and later charged with propaganda against the Iranian government. Despite support from filmmakers, film organizations, and human rights organizations around the world, in December 2010 Panahi was sentenced to six years in prison and a 20-year ban on directing any movies, writing screenplays, giving interviews with Iranian or foreign media, or leaving the country except for medical treatment or making the Hajj pilgrimage. While awaiting the result of an appeal he made This Is Not a Film (2011), a documentary feature in the form of a video diary. It was smuggled out of Iran on a flash drive hidden inside a cake and shown at the 2011 Cannes Film Festival. In February 2013 the 63rd Berlin International Film Festival showed Closed Curtain (Pardé) by Panahi and Kambuzia Partovi in competition; Panahi won the Silver Bear for Best Script. Panahi's subsequent film Taxi also premiered in competition at the 65th Berlin International Film Festival in February 2015 and won the Golden Bear, the prize awarded for the best film in the festival. In 2018 he won the Cannes Film Festival Award for Best Screenplay (tied) for 3 Faces; he was unable to leave Iran to attend the festival, so his daughter, Solmaz Panahi, read his statement and received the award on his behalf. 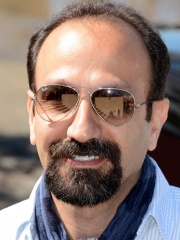 With an HPI of 63.25, Asghar Farhadi is the 4th most famous Iranian Film Director.  His biography has been translated into 50 different languages.

Asghar Farhadi (Persian: اصغر فرهادی‎; Persian pronunciation: [æsɢæɾ ɛ fæɾhɑːdiː] pronunciation born 7 May 1972) is an Iranian film director and screenwriter. Farhadi has won critical praise for his international films which focus on the human condition as well as portray intimate and challenging stories of internal family conflicts. His films include About Elly (2009), A Separation (2011), The Past (2013), The Salesman (2016), and Everybody Knows (2018). Farhadi has received two Oscars for Best Foreign Language Film for his films A Separation (2011) and The Salesman (2016), making him one of the few directors worldwide who have won the category twice. He also received the Cannes Film Festival Award for Best Screenplay for his film The Salesman. In 2012, he was included on the annual Time 100 list of the most influential people in the world. That same year he also received the Legion of Honour from France. 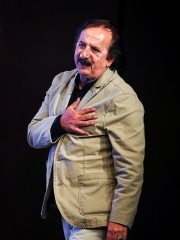 With an HPI of 61.37, Majid Majidi is the 5th most famous Iranian Film Director.  His biography has been translated into 34 different languages.

Majid Majidi (Persian: مجید مجیدی‎, Persian pronunciation: [mæˌdʒiːde, mædʒiːˈdi]; born 17 April 1959) is an Iranian film director, producer, and screenwriter, who started his film career as an actor. In his films, Majidi has touched on many themes and genres and has won numerous international awards. 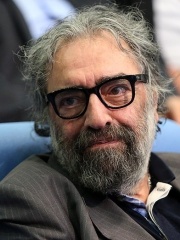 With an HPI of 60.95, Masoud Kimiai is the 6th most famous Iranian Film Director.  His biography has been translated into 15 different languages. 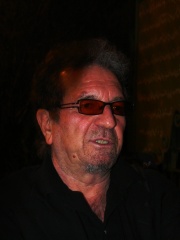 With an HPI of 60.91, Dariush Mehrjui is the 7th most famous Iranian Film Director.  His biography has been translated into 20 different languages.

Dariush Mehrju'i (Persian: داریوش مهرجویی‎, born 8 December 1939, also spelled as Mehrjui, Mehrjoui, and Mehrjuyi) is an Iranian director, screenwriter, producer, film editor and a member of the Iranian Academy of the Arts.Mehrjui was a founding member of the Iranian New Wave movement of the early 1970s. His second film, Gaav, is considered to be the first film of this movement, which also included Masoud Kimiai and Nasser Taqvai. Most of his films are inspired by literature and adapted from Iranian and foreign novels and plays. 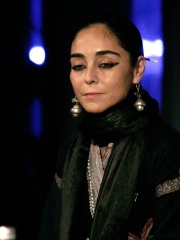 With an HPI of 60.69, Shirin Neshat is the 8th most famous Iranian Film Director.  Her biography has been translated into 24 different languages.

Shirin Neshat (Persian: شیرین نشاط‎; born March 26, 1957 Qazvin) is an Iranian visual artist who lives in New York City, known primarily for her work in film, video and photography. Her artwork centers on the contrasts between Islam and the West, femininity and masculinity, public life and private life, antiquity and modernity, and bridging the spaces between these subjects.Since Iran has undermined basic human rights, particularly since the Islamic Revolution she has said that she has "gravitated toward making art that is concerned with tyranny, dictatorship, oppression and political injustice. Although I don’t consider myself an activist, I believe my art – regardless of its nature – is an expression of protest, a cry for humanity.”Neshat has been recognized for winning the International Award of the XLVIII Venice Biennale in 1999, and the Silver Lion as the best director at the 66th Venice Film Festival in 2009, to being named Artist of the Decade by Huffington Post critic G. Roger Denson. Neshat is a critic in the photography department at the Yale School of Art. 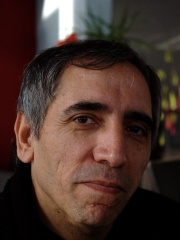 With an HPI of 60.02, Mohsen Makhmalbaf is the 9th most famous Iranian Film Director.  His biography has been translated into 25 different languages.

Mohsen Makhmalbaf (Persian: محسن مخملباف‎, Mohsen Makhmalbaaf; born May 29, 1957) is an Iranian film director, writer, film editor, and producer. He has made more than 20 feature films, won some 50 awards and been a juror in more than 15 major film festivals. His award-winning films include Kandahar; his latest documentary is The Gardener and latest feature The President. Makhmalbaf's films have been widely presented at international film festivals in the past ten years. The director belongs to the new wave movement of Iranian cinema. Time selected Makhmalbaf's 2001 film Kandahar as one of the top 100 films of all time. In 2006, he was a member of the Jury at the Venice Film Festival. Makhmalbaf left Iran in 2005 shortly after the election of Mahmoud Ahmadinejad, and has lived in Paris since the events of the 2009 Iranian presidential election. 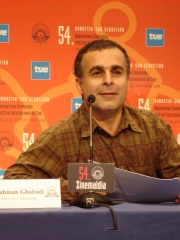 With an HPI of 56.30, Bahman Ghobadi is the 10th most famous Iranian Film Director.  His biography has been translated into 33 different languages.