This page contains a list of the greatest Spanish Companions. The pantheon dataset contains 673 Companions, 40 of which were born in Spain. This makes Spain the birth place of the 5th most number of Companions behind United Kingdom and Italy.

The following people are considered by Pantheon to be the top 10 most legendary Spanish Companions of all time. This list of famous Spanish Companions is sorted by HPI (Historical Popularity Index), a metric that aggregates information on a biography’s online popularity. Visit the rankings page to view the entire list of Spanish Companions. 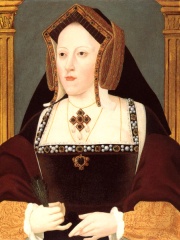 With an HPI of 80.46, Catherine of Aragon is the most famous Spanish Companion.  Her biography has been translated into 69 different languages on wikipedia.

Catherine of Aragon (also spelt as Katherine, Spanish: Catalina; 16 December 1485 – 7 January 1536) was Queen of England as the first wife of King Henry VIII from their marriage on 11 June 1509 until their annulment on 23 May 1533. She was previously Princess of Wales as the wife of Henry's elder brother, Arthur, Prince of Wales. The daughter of Isabella I of Castile and Ferdinand II of Aragon, Catherine was three years old when she was betrothed to Prince Arthur, heir apparent to the English throne. They married in 1501, but Arthur died five months later. Catherine spent years in limbo, and during this time, she held the position of ambassador of the Aragonese crown to England in 1507, the first known female ambassador in European history. She married Arthur's younger brother, the recently ascended Henry VIII, in 1509. For six months in 1513, she served as regent of England while Henry VIII was in France. During that time the English crushed and defeated a Scottish invasion at the Battle of Flodden, an event in which Catherine played an important part with an emotional speech about English courage and patriotism.By 1525, Henry VIII was infatuated with Anne Boleyn and dissatisfied that his marriage to Catherine had produced no surviving sons, leaving their daughter Mary as heir presumptive at a time when there was no established precedent for a woman on the throne. He sought to have their marriage annulled, setting in motion a chain of events that led to England's schism with the Catholic Church. When Pope Clement VII refused to annul the marriage, Henry defied him by assuming supremacy over religious matters. In 1533 their marriage was consequently declared invalid and Henry married Anne on the judgement of clergy in England, without reference to the pope. Catherine refused to accept Henry as supreme head of the Church in England and considered herself the king's rightful wife and queen, attracting much popular sympathy. Despite this, Henry acknowledged her only as dowager princess of Wales. After being banished from court by Henry, Catherine lived out the remainder of her life at Kimbolton Castle, dying there in January 1536 of cancer. The English people held Catherine in high esteem, and her death set off tremendous mourning. Her daughter Mary would become the first undisputed English queen regnant in 1553. Catherine commissioned The Education of a Christian Woman by Juan Luis Vives, who dedicated the book, controversial at the time, to the Queen in 1523. Such was Catherine's impression on people that even her adversary Thomas Cromwell said of her, "If not for her sex, she could have defied all the heroes of History." She successfully appealed for the lives of the rebels involved in the Evil May Day, for the sake of their families, and also won widespread admiration by starting an extensive programme for the relief of the poor. Catherine was a patron of Renaissance humanism, and a friend of the great scholars Erasmus of Rotterdam and Thomas More. 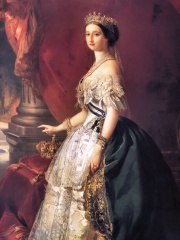 With an HPI of 73.04, Eugénie de Montijo is the 2nd most famous Spanish Companion.  Her biography has been translated into 47 different languages.

Doña María Eugenia Ignacia Agustina de Palafox y Kirkpatrick, 19th Countess of Teba, 16th Marchioness of Ardales (5 May 1826 – 11 July 1920), known as Eugénie de Montijo (French: [øʒeni də montiχo]), was Empress of the French from her marriage to Emperor Napoleon III on 30 January 1853 until the Emperor was overthrown on 4 September 1870. Born to prominent Spanish nobility, Eugénie was educated in France, Spain, and England. As Empress, she used her influence to champion "authoritarian and clerical policies"; her involvement in politics earned her much criticism from contemporaries. Napoléon and Eugénie had one child together, Napoléon, Prince Imperial (1856–79). After the fall of the Empire, the three lived in exile in England; Eugénie outlived both her husband and son and spent the remainder of her life working to commemorate their memories and the memory of the Second Empire. 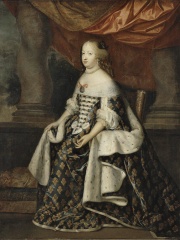 With an HPI of 72.89, Maria Theresa of Spain is the 3rd most famous Spanish Companion.  Her biography has been translated into 49 different languages.

Maria Theresa of Spain (Spanish: María Teresa de Austria; French: Marie-Thérèse d'Autriche; 10 September 1638 – 30 July 1683) was Queen of France from 1660 to 1683 as the wife of King Louis XIV. She was born an Infanta of Spain and Portugal as the daughter of King Philip IV and Elisabeth of France, and was also an Archduchess of Austria as a member of the Spanish branch of the House of Habsburg. Her marriage in 1660 to King Louis XIV, her double first cousin, was arranged with the purpose of ending the lengthy war between France and Spain. Famed for her virtue and piety, she saw five of her six children die in early childhood, and is frequently viewed as an object of pity in historical accounts of her husband's reign, since she was often neglected by the court and overshadowed by the King's many mistresses. Without any political influence in the French court or government (except briefly in 1672, when she was named regent during her husband's absence during the Franco-Dutch War), she died at the age of 44 due to complications from an abscess on her arm. Her grandson Philip V inherited the Spanish throne in 1700 after the death of her younger half-brother, Charles II. The resulting War of the Spanish Succession established the House of Bourbon as the new ruling dynasty of Spain, where it has reigned with some interruption until the present time. 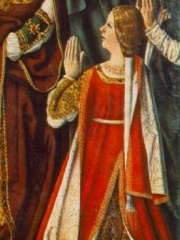 With an HPI of 69.27, Isabella of Aragon, Queen of Portugal is the 4th most famous Spanish Companion.  Her biography has been translated into 37 different languages.

Isabella, Princess of Asturias (2 October 1470 – 23 August 1498) was the eldest daughter and heir presumptive of King Ferdinand II of Aragon and Queen Isabella I of Castile. She was Queen of Portugal as the wife of King Manuel I from 30 September 1497 until her death the following year. 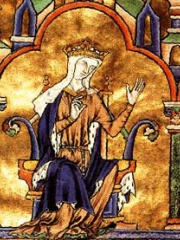 With an HPI of 69.27, Blanche of Castile is the 5th most famous Spanish Companion.  Her biography has been translated into 44 different languages.

Blanche of Castile (Spanish: Blanca de Castilla; 4 March 1188 – 27 November 1252) was Queen of France by marriage to Louis VIII. She acted as regent twice during the reign of her son, Louis IX: during his minority from 1226 until 1234, and during his absence from 1248 until 1252. She was born in Palencia, Spain, in 1188, the third daughter of Alfonso VIII, King of Castile, and Eleanor of England, sister of King Richard I of England and King John of England. 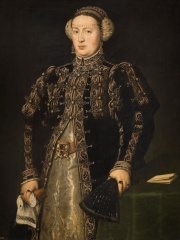 With an HPI of 68.48, Catherine of Austria, Queen of Portugal is the 6th most famous Spanish Companion.  Her biography has been translated into 34 different languages. 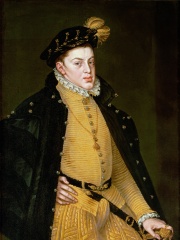 With an HPI of 66.69, Carlos, Prince of Asturias is the 7th most famous Spanish Companion.  His biography has been translated into 40 different languages.

Carlos, Prince of Asturias, also known as Don Carlos (8 July 1545 – 24 July 1568), was the eldest son and heir apparent of King Philip II of Spain. His mother was Maria Manuela of Portugal, daughter of John III of Portugal. Carlos was mentally unstable and was imprisoned by his father in early 1568, dying after half a year of solitary confinement. His fate was a theme in Spain's Black Legend, and inspired a play by Friedrich Schiller and an opera by Giuseppe Verdi. 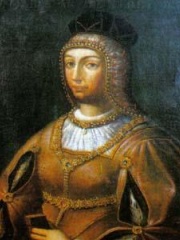 With an HPI of 66.53, Maria of Aragon, Queen of Portugal is the 8th most famous Spanish Companion.  Her biography has been translated into 36 different languages.

Maria of Aragon (29 June 1482 – 7 March 1517) was Queen of Portugal as the second spouse of King Manuel I, the widower of her elder sister Isabella. 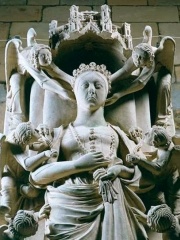 With an HPI of 66.12, Inês de Castro is the 9th most famous Spanish Companion.  Her biography has been translated into 26 different languages.

Inês de Castro (Portuguese pronunciation: [iˈneʒ dɨ ˈkaʃtɾu]; in Castilian: Inés; 1325 – 7 January 1355) was a Galician noblewoman and courtier, best known as lover and posthumously-recognized wife of King Peter I of Portugal. The dramatic circumstances of her relationship with Peter (at the time Prince of Portugal), which was forbidden by his father King Afonso IV, her murder at the orders of Afonso, Peter's bloody revenge on her killers, and the legend of the coronation of her exhumed corpse by Peter, have made Inês de Castro a frequent subject of art, music, and drama through the ages. 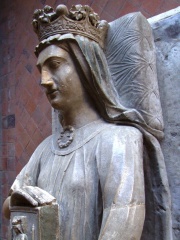 With an HPI of 65.61, Berengaria of Navarre is the 10th most famous Spanish Companion.  Her biography has been translated into 38 different languages.

Berengaria of Navarre (Basque: Berengela, Spanish: Berenguela, French: Bérengère; c. 1165–1170 – 23 December 1230) was Queen of England as the wife of Richard I of England. She was the eldest daughter of Sancho VI of Navarre and Sancha of Castile. As is the case with many of the medieval English queens, little is known of her life. Traditionally known as "the only English queen never to set foot in the country", she may in fact have visited England after her husband's death, but did not do so before, nor did she see much of Richard during her marriage, which was childless. She did (unusually for the wife of a crusader) accompany him on the start of the Third Crusade, but mostly lived in his French possessions, where she gave generously to the church, despite difficulties in collecting the pension she was due from Richard's brother and successor John after she became a widow.

Pantheon has 40 people classified as companions born between 356 and 1860. Of these 40, none of them are still alive today. The most famous deceased companions include Catherine of Aragon, Eugénie de Montijo, and Maria Theresa of Spain. As of April 2022, 1 new companions have been added to Pantheon including Joanna of Aragon, Queen of Naples.

Which Companions were alive at the same time? This visualization shows the lifespans of the 6 most globally memorable Companions since 1700.