This page contains a list of the greatest Pakistani Actors. The pantheon dataset contains 10,030 Actors, 32 of which were born in Pakistan. This makes Pakistan the birth place of the 25th most number of Actors behind New Zealand and Denmark.

The following people are considered by Pantheon to be the top 10 most legendary Pakistani Actors of all time. This list of famous Pakistani Actors is sorted by HPI (Historical Popularity Index), a metric that aggregates information on a biography’s online popularity. Visit the rankings page to view the entire list of Pakistani Actors. 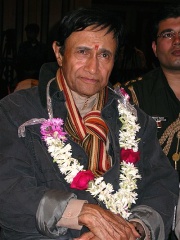 With an HPI of 69.55, Dev Anand is the most famous Pakistani Actor.  His biography has been translated into 35 different languages on wikipedia.

Dharamdev Pishorimal Anand (26 September 1923 – 3 December 2011), better known as Dev Anand, was an Indian film actor, writer, director and producer known for his work in Hindi cinema, through a career that spanned over six decades. He was one of the most successful actors in the Indian film industry. 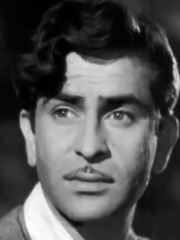 With an HPI of 69.28, Raj Kapoor is the 2nd most famous Pakistani Actor.  His biography has been translated into 62 different languages.

Raj Kapoor (born Shrishti Nath Kapoor; also known as Ranbir Raj Kapoor; 14 December 1924 – 2 June 1988) was an Indian actor, film producer and film director who worked in Hindi cinema. He received multiple accolades, including three National Film Awards and 11 Filmfare Awards in India. The Filmfare Lifetime Achievement Award is named after Kapoor. He was a two-time nominee for the Palme d'Or grand prize at the Cannes Film Festival for his films Awaara (1951) and Boot Polish (1954). His performance in Awaara was ranked as one of the top ten greatest performances of all time by Time magazine. His films attracted worldwide audiences, particularly in Asia and Europe. The Government of India honoured him with the Padma Bhushan in 1971 for his contributions to the arts. India's highest award in cinema, the Dadasaheb Phalke Award, was bestowed on him in 1987 by the Government of India. 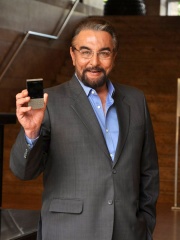 With an HPI of 66.16, Kabir Bedi is the 3rd most famous Pakistani Actor.  His biography has been translated into 34 different languages.

Kabir Bedi (born 16 January 1946) is an Indian film actor. His career has spanned three continents covering India, the United States and especially Italy among other European countries in three media: film, television and theatre. He is noted for his role as Emperor Shah Jahan in Taj Mahal: An Eternal Love Story and the villainous Sanjay Verma in the 1980s blockbuster Khoon Bhari Maang. He is best known in Italy and Europe for playing the pirate Sandokan in the popular Italian TV mini series and for his role as the villainous Gobinda in the 1983 James Bond film Octopussy. Kabir Bedi is based in India and lives in Mumbai. 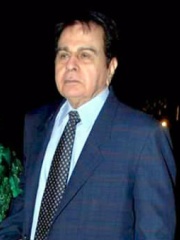 With an HPI of 64.80, Dilip Kumar is the 4th most famous Pakistani Actor.  His biography has been translated into 43 different languages.

Mohammed Yusuf Khan (11 December 1922 – 7 July 2021), better known by his stage name Dilip Kumar, was an Indian actor and film producer who worked in Hindi cinema. Referred to as the "Tragedy King" for his portrayal of serious roles and retrospectively as "The First Khan" of Bollywood, he has been described as one of the most successful film stars in the industry and is credited with bringing a distinct form of method acting to cinema. Kumar holds the record for most wins for the Filmfare Award for Best Actor (eight, which was later equalled by Shah Rukh Khan), and was also the inaugural recipient of the award. In a career spanning over five decades, Kumar worked in over 65 films in a variety of roles. He debuted as an actor in the film Jwar Bhata (1944), produced by Bombay Talkies. Following a series of unsuccessful ventures, he had his first box office hit in Jugnu (1947). Kumar found further success with the romantic Andaz (1949), the swashbuckling Aan (1952), the social drama Daag (1952), the dramatic Devdas (1955), the comical Azaad (1955), the romantic social Naya Daur (1957), the noir mystery Madhumati (1958), the comedy-drama Paigham (1959) the epic historical Mughal-e-Azam (1960), the social dacoit crime drama Gunga Jamuna (1961), and the comedy Ram Aur Shyam (1967). Both Andaz and Aan briefly became the highest-grossing Indian film up to that point, a feat later achieved by Mughal-e-Azam, which sustained the record for 15 years. As of 2021, the latter remains the highest-grossing film in India when adjusted for inflation. The 1970s saw Kumar's career take a downturn, marked by three back to back commercial failures, namely Dastaan (1972), Sagina (1974) and Bairaag (1976). In 1976, he went on a five-year hiatus from film performances and returned with the revolutionary drama Kranti, which was the highest-grossing Indian film of the year. He continued to play leading roles in films such as Shakti (1982), Karma (1986), and Saudagar (1991). His last on-screen appearance was in the commercially unsuccessful Qila (1998), which saw him in a dual role. Kumar later served as a member of the Rajya Sabha, the upper house of India's parliament, from 2000 to 2006. Kumar's personal life was the subject of much media attention. He was in a long-term relationship with actress and frequent co-star Madhubala that ended after the Naya Daur court case in 1957. He married actress Saira Banu in 1966 and resided in Bandra, a suburb of Mumbai, until his death in 2021. For his contributions to film, the Government of India awarded him with the Padma Bhushan in 1991 and the Padma Vibhushan in 2015, the country's third and second-highest civilian awards respectively. He was also awarded India's highest accolade in the field of cinema, the Dadasaheb Phalke Award in 1994. In 1998, the Government of Pakistan conferred Kumar with Nishan-e-Imtiaz, their highest civilian decoration, making him the only Indian to have received the honour. The house that Kumar grew up in, located in Peshawar, was declared a national heritage monument in 2014 by the Pakistani government. 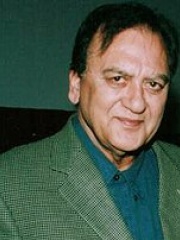 With an HPI of 62.52, Sunil Dutt is the 5th most famous Pakistani Actor.  His biography has been translated into 36 different languages.

Sunil Dutt (born Balraj Dutt; 6 June 1929 - 25 May 2005) was an Indian film actor, producer, director and politician. He was the Minister of Youth Affairs and Sports in the Manmohan Singh government (2004–2005). He was a former Sheriff of Mumbai. He is the father of actor Sanjay Dutt and politician Priya Dutt.In 1968, he was honoured by the Padma Shri by the Government of India. In 1984 he joined the Indian National Congress party and was elected to the Parliament of India for five terms from the constituency of Mumbai North West. 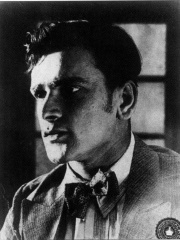 With an HPI of 61.60, Prithviraj Kapoor is the 6th most famous Pakistani Actor.  His biography has been translated into 27 different languages.

Prithviraj Kapoor (born Prithvinath Kapoor; 3 November 1906 – 29 May 1972) was an Indian actor, film producer, writer, and film director, who is also considered to be one of the founding figures of Hindi cinema. He was associated with IPTA as one of its founding members and established the Prithvi Theatres in 1944 as a travelling theatre company based in Mumbai. He was the patriarch of the Kapoor family of Hindi films, four generations of which, beginning with him, have played active roles in the Hindi film industry, with the youngest generation still active in Bollywood. His father, Basheshwar Nath Kapoor, also played a short role in his movie Awara. The Government of India honoured him with the Padma Bhushan in 1969 and the Dadasaheb Phalke Award in 1971 for his contributions towards Indian cinema. 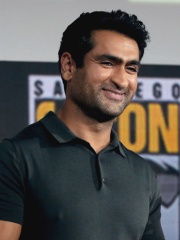 With an HPI of 61.54, Kumail Nanjiani is the 7th most famous Pakistani Actor.  His biography has been translated into 23 different languages.

Kumail Ali Nanjiani (; born 1977 or 1978) is a Pakistani-American comedian, actor, screenwriter, and podcaster primarily known for his role as Dinesh in the HBO comedy series Silicon Valley (2014–2019) and for co-writing and starring in the romantic comedy film The Big Sick (2017). For co-writing the latter with his wife, Emily V. Gordon, he was nominated for the Academy Award for Best Original Screenplay. In 2018, Time magazine named him one of the 100 most influential people in the world.Nanjiani has also voiced Prismo on the animated series Adventure Time and starred in the TNT series Franklin & Bash and the Adult Swim series Newsreaders. He also co-hosted the Comedy Central show The Meltdown with Jonah and Kumail, as well as playing various roles on the comedy series Portlandia. He also starred in the action film Stuber (2019). 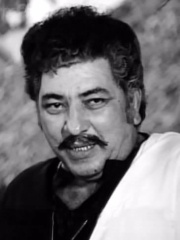 With an HPI of 59.67, Amjad Khan is the 8th most famous Pakistani Actor.  His biography has been translated into 23 different languages.

Amjad Khan (12 November 1940 – 27 July 1992) was an Indian actor and film director. He worked in over 132 films in a career spanning nearly twenty years. He gained popularity for villainous roles in mostly Hindi films, the most famous being Gabbar Singh in the 1975 classic Sholay and of Dilawar in Muqaddar Ka Sikandar (1978). 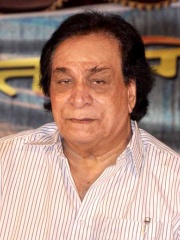 With an HPI of 59.30, Kader Khan is the 9th most famous Pakistani Actor.  His biography has been translated into 28 different languages.

Kader Khan (22 October 1937 – 31 December 2018) was an Indian film actor, screenwriter, comedian, and film director. As an actor, he appeared in over 300 Bollywood films after his debut film in the 1973 film Daag, starring Rajesh Khanna, in which he acted as a prosecuting attorney. He was also a prolific screenwriter for Bollywood films in the period 1970s to 1999 and wrote dialogues for 200 films. Khan graduated from Ismail Yusuf College affiliated to Bombay University. Before entering the film industry in the early 1970s, he taught at M. H. Saboo Siddik College of Engineering, Mumbai, as a professor of Civil engineering. 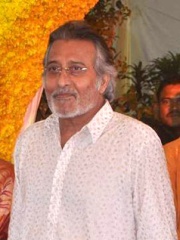 With an HPI of 58.84, Vinod Khanna is the 10th most famous Pakistani Actor.  Her biography has been translated into 32 different languages.

Vinod Khanna (6 October 1946 – 27 April 2017) was an Indian actor, film producer and politician who is best known for his work in Hindi films. He was the recipient of two Filmfare awards. He was the MP from the Gurdaspur constituency between 1998–2009 and 2014–2017. In July 2002, Khanna became the minister for Culture and Tourism in the Atal Bihari Vajpayee cabinet. Six months later, he became the Minister of State for External Affairs. Khanna was known to be one of the highest-paid stars of his times, along with Rajesh Khanna and Amitabh Bachchan.After making his film debut in 1968, Khanna first acted in supporting and antagonistic roles; as an angry young man in the movie Mere Apne, as the main villain in the highly successful crime drama Mera Gaon Mera Desh, and as the military officer turned fugitive in the critically acclaimed movie Achanak, which was a film based on the events of K. M. Nanavati v. State of Maharashtra. Khanna played lead roles in many films and is best remembered for his performances in Kuchhe Dhaage, Gaddaar, Imtihaan, Muqaddar Ka Sikandar, Inkaar, Amar Akbar Anthony, Rajput, The Burning Train, Qurbani, Kudrat, Parvarish, Khoon Pasina, Dayavan, Chandni and Jurm.In 1982, at the peak of his film career, Khanna temporarily quit the film industry to follow his spiritual guru Osho Rajneesh. After a 5-year hiatus, he returned to the Hindi film industry with two hit films- Insaaf and Satyamev Jayate.Khanna has been posthumously awarded India's highest award in cinema, the Dadasaheb Phalke Award in 2018 by the Government of India at 65th National Film Awards.

Pantheon has 32 people classified as actors born between 1906 and 1990. Of these 32, 15 (46.88%) of them are still alive today. The most famous living actors include Kabir Bedi, Dilip Kumar, and Kumail Nanjiani. The most famous deceased actors include Dev Anand, Raj Kapoor, and Sunil Dutt. As of October 2020, 3 new actors have been added to Pantheon including Raaj Kumar, Prem Chopra, and Dilshad Vadsaria.

Which Actors were alive at the same time? This visualization shows the lifespans of the 17 most globally memorable Actors since 1700.