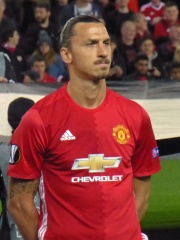 Zlatan Ibrahimović (Swedish: [ˈslǎːtan ɪbraˈhǐːmʊvɪtɕ], Bosnian: [zlǎtan ibraxǐːmoʋitɕ]; born 3 October 1981) is a Swedish professional footballer who plays as a striker for Serie A club AC Milan and the Sweden national team. Ibrahimović is renowned for his acrobatic strikes and volleys, powerful long-range shots, and excellent technique and ball control. He is regarded as one of the greatest strikers of all time and is one of the most decorated active footballers in the world, having won 34 trophies in his career. Read more on Wikipedia

Zlatan Ibrahimović is a Swedish professional footballer who plays as a forward for LA Galaxy. He is the most prolific Swedish scorer in history and the country's all-time leading goalscorer. He has played for a number of clubs, including Malmö FF, Ajax, Juventus, Inter Milan, Barcelona, Milan, Paris Saint-Germain, and Manchester United. He is the only player to have scored in six consecutive editions of the UEFA Champions League. He is also the only player to have scored for six different clubs in the Champions League.