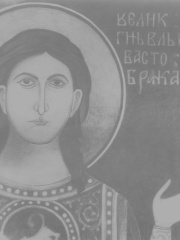 Vuk Branković (Serbian Cyrillic: Вук Бранковић, pronounced [ʋûːk brǎːnkoʋit͡ɕ], 1345 – 6 October 1397) was a Serbian medieval nobleman who, during the Fall of the Serbian Empire, inherited a province that extended over present-day southern and southwestern Serbia, entire Kosovo, the northern part of present day Republic of North Macedonia, and northern Montenegro. His fief (and later state) was known as Oblast Brankovića (District of Branković) or simply as Vukova zemlja (Vuk's land), which he held with the title of gospodin (lord, sir), under Prince Lazar of Serbia. Read more on Wikipedia

Vuk Branković was a Serbian nobleman and ruler of the Serbian Despotate from 1427 to 1456. He was the son of Serbian ruler Stefan Branković and the Byzantine princess Irene Kantakouzene.

Among politicians, Vuk Branković ranks 3,164 out of 15,710. Before him are Nectanebo I, Zechariah of Israel, Emperor Taizu of Jin, Dian Wei, Taira no Kiyomori, and Abu'l-Fida. After him are Charles III, Duke of Parma, Berenice I of Egypt, Al-Wathiq, Sambhaji, Telipinu, and Emperor Go-Sai.

Among people born in 1345, Vuk Branković ranks 3. Before him are Charles III of Naples and Ferdinand I of Portugal. After him are Gongyang of Goryeo, Blanche of Lancaster, Helen of Bosnia, and Magnus I, Duke of Mecklenburg. Among people deceased in 1397, Vuk Branković ranks 2. Before him is Francesco Landini. After him are Ivan Sratsimir of Bulgaria, Skirgaila, John II, Duke of Bavaria, Albert II, Duke of Bavaria, and Thomas of Woodstock, 1st Duke of Gloucester.