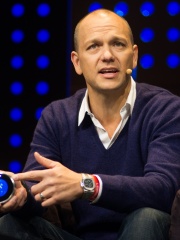 Anthony Michael Fadell (born March 22, 1969) is an American engineer, innovator, designer, entrepreneur, founder, coach, and active investor. The "father of the iPod", he joined Apple Inc. in 2001, served as the Senior Vice President of the iPod division at Apple Inc. Read more on Wikipedia

Since 2007, the English Wikipedia page of Tony Fadell has received more than 578,656 page views. His biography is available in 17 different languages on Wikipedia making him the 320th most popular inventor.

Among inventors, Tony Fadell ranks 320 out of 323. Before him are Dean Kamen, Marc Andreessen, Elizabeth Holmes, Stanford R. Ovshinsky, Arunachalam Muruganantham, and Jarkko Oikarinen. After him are George Hotz, Jack Andraka, and Simone Giertz.