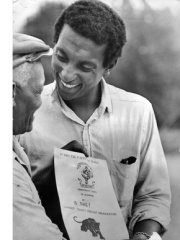 Kwame Ture (; born Stokely Standiford Churchill Carmichael; June 29, 1941 – November 15, 1998) was a prominent organizer in the civil rights movement in the United States and the global Pan-African movement. Born in Trinidad, he grew up in the United States from the age of 11 and became an activist while attending the Bronx High School of Science. He eventually developed the Black Power movement, first while leading the Student Nonviolent Coordinating Committee (SNCC), later serving as the "Honorary Prime Minister" of the Black Panther Party (BPP), and lastly as a leader of the All-African People's Revolutionary Party (A-APRP).Carmichael was one of the original SNCC freedom riders of 1961 under Diane Nash's leadership. Read more on Wikipedia

Since 2007, the English Wikipedia page of Stokely Carmichael has received more than 2,714,414 page views. His biography is available in 17 different languages on Wikipedia making him the 353rd most popular social activist.