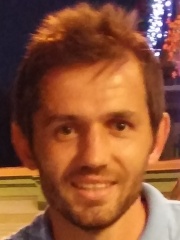 Senad Lulić (Bosnian pronunciation: [sěnaːd lǔlitɕ]; born 18 January 1986) is a Bosnian professional footballer who plays as a midfielder for Serie A club Lazio. Lulić started his professional career at Chur 97, before joining Bellinzona in 2006. Two years later, he moved to Grasshopper. Read more on Wikipedia

Since 2007, the English Wikipedia page of Senad Lulić has received more than 313,330 page views. His biography is available in 36 different languages on Wikipedia making him the 4,072nd most popular soccer player.