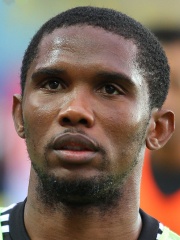 Samuel Eto'o Fils (French pronunciation: ​[samɥɛl eto fis]; born 10 March 1981) is a Cameroonian football administrator and former player who is the current president of the Cameroonian Football Federation from 11 December 2021. In his prime, Eto'o was regarded by pundits as one of the best strikers in the world, and he is regarded as one of the greatest African players of all time, winning the African Player of the Year a record four times: in 2003, 2004, 2005, and 2010. A precocious talent, Eto'o moved to Real Madrid as a 16 year old. Read more on Wikipedia

Samuel Eto'o is a Cameroonian professional footballer who plays as a striker for Turkish club Antalyaspor. He is the most decorated African player in history, having won the African Player of the Year award a record four times in 2003, 2004, 2005, and 2010.