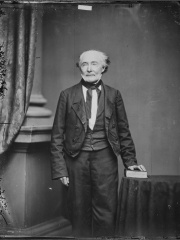 Robert John Walker (July 19, 1801 – November 11, 1869) was an American lawyer, economist and politician. An active member of the Democratic Party, he served as a member of the U.S. Senate from Mississippi from 1835 until 1845, as Secretary of the Treasury from 1845 to 1849 during the administration of President James K. Polk, and briefly as Territorial Governor of Kansas in 1857. Read more on Wikipedia

Since 2007, the English Wikipedia page of Robert J. Walker has received more than 77,521 page views. His biography is available in 15 different languages on Wikipedia making him the 12,943rd most popular politician.