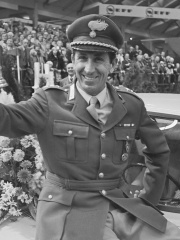 Raimondo D'Inzeo (8 February 1925 – 15 November 2013) was an Italian show jumping rider, an Olympic champion and double world champion. Together with his elder brother Piero D'Inzeo, he was the first athlete to compete in eight consecutive Olympic games, in 1948–1976. At the Rome Olympics in 1960 Raimondo won the gold medal and Piero won the silver in show jumping.Being an officer in the Carabinieri Cavalry Regiment D'Inzeo always wore a uniform when competing in tournaments. Read more on Wikipedia

Since 2007, the English Wikipedia page of Raimondo D'Inzeo has received more than 17,474 page views. His biography is available in 18 different languages on Wikipedia making him the 331st most popular athlete.