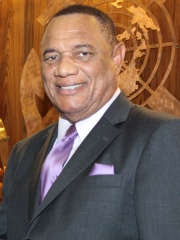 Perry Gladstone Christie PC, MP (born 21 August 1943) is a Bahamian former politician who served as Prime Minister of the Bahamas from 2002 to 2007 and from 2012 to 2017. He is the second longest-serving Bahamian elected parliamentarian (behind the late Sir Roland Symonette who was first elected to parliament in 1925 and served until 1977), representing the Centreville constituency from 1977 to 2017. He is also a former athlete. Read more on Wikipedia

Among politicians, Perry Christie ranks 13,996 out of 15,577. Before him are Ján Zachara, Li Changchun, Portia Simpson-Miller, Franco Marini, Job Cohen, and Gratian. After him are Gholam-Ali Haddad-Adel, Æscwine of Essex, Countess Friederike von Schlieben, Prince Nikolaos of Greece and Denmark, Nikola Šainović, and William McMahon.

Others born in The Bahamas

Among POLITICIANS In The Bahamas