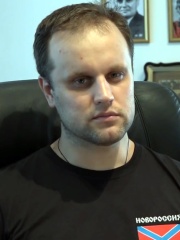 Pavel Yuryevich Gubarev (Russian: Па́вел Ю́рьевич Гу́барев, pronounced [ˈpavʲɪl ˈjʉrʲɪvʲɪtɕ ˈgubərʲɪf], Ukrainian: Павло Юрійович Губарєв), born 10 February 1983 in Sievierodonetsk, is a Ukrainian pro-Russian activist who proclaimed himself the "People's Governor" of the Donetsk Region at the Regional Assembly on 3 March 2014, after separatists seized the building. Gubarev had earlier declared himself leader of the Donbass People's Militia. But since then he has been sidelined by other separatist leaders and was banned from taking part in the 2014 Donbass parliamentary elections. Read more on Wikipedia

Since 2007, the English Wikipedia page of Pavel Gubarev has received more than 102,425 page views. His biography is available in 17 different languages on Wikipedia making him the 14,284th most popular politician.