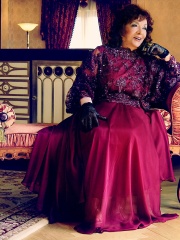 Nexhmije Pagarusha (Albanian pronunciation: [neˈd͡ʒmijɛ pagaˈɾuʃa]; 7 May 1933 – 7 February 2020) was a Kosovo-Albanian singer and actress, often referred to as the queen of Kosovan music. Pagarusha gained acclaim as a recording artist in Kosova and neighbouring countries for her distinct soprano vocal range, which she displayed performing various Kosovan folk songs during her career, which spanned 36 years, from 1948, in her debut in Radio Prishtina, to 1984, in her final concert in Sarajevo. Read more on Wikipedia