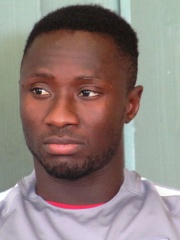 Naby Laye Keïta (born 10 February 1995) is a Guinean professional footballer who plays as a central midfielder for Premier League club Liverpool and the Guinea national team.Keïta began his professional career with Ligue 2 club FC Istres in 2013, and a year later he moved to Red Bull Salzburg, where he won the Austrian Football Bundesliga and Austrian Cup double in both of his seasons. He then moved to RB Leipzig in 2016, making the Bundesliga team of the season in his first year and the UEFA Europa League squad of the season in his second. Read more on Wikipedia

Since 2007, the English Wikipedia page of Naby Keïta has received more than 3,625,326 page views. His biography is available in 38 different languages on Wikipedia (up from 33 in 2019). Naby Keïta is the 4,333rd most popular soccer player (down from 2,731st in 2019), the 12th most popular biography from Guinea and the most popular Guinean Soccer Player.

Among SOCCER PLAYERS In Guinea