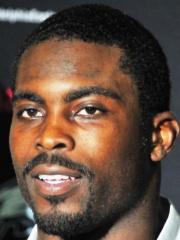 Michael Dwayne Vick (born June 26, 1980) is a former professional American football quarterback who played 13 seasons in the National Football League (NFL), primarily with the Atlanta Falcons and the Philadelphia Eagles. He played college football at Virginia Tech and was selected by the Falcons as the first overall pick in the 2001 NFL Draft. During his six years with the Falcons, Vick was regarded as having transformed the quarterback position with his rushing abilities and was named to three Pro Bowls. Read more on Wikipedia

Since 2007, the English Wikipedia page of Michael Vick has received more than 8,786,222 page views. His biography is available in 15 different languages on Wikipedia making him the 31st most popular american football player.