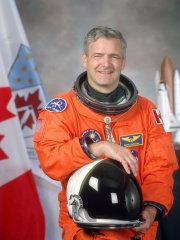 Joseph Jean-Pierre Marc Garneau, (born February 23, 1949) is a Canadian politician and the Minister of Transport in the Government of Canada. He is a retired military officer, former astronaut, and engineer; Garneau was the first Canadian in space, taking part in three flights aboard NASA Space Shuttles in 1984, 1996 and 2000. Garneau was the president of the Canadian Space Agency from 2001 to 2006, and in 2003 was installed as the ninth Chancellor of Carleton University in Ottawa, Ontario.Garneau has served as the Member of Parliament for the riding of Notre-Dame-de-Grâce—Westmount, and its predecessor Westmount—Ville-Marie, in Montreal since the 2008 federal election, winning by over 9,000 votes. Read more on Wikipedia

Since 2007, the English Wikipedia page of Marc Garneau has received more than 453,780 page views. His biography is available in 20 different languages on Wikipedia making him the 13,168th most popular politician.