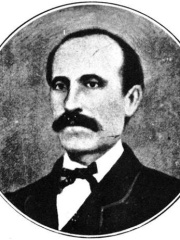 José María Ventura Casas (Catalan: Josep Maria Ventura i Casas, Alcalá la Real (Jaén), 1817 – Figueres (Catalonia), 1875), popularly known by Catalans as Pep Ventura, was a Spanish musician and composer who consolidated the long sardana and reformed the cobla, adding instruments to give it its current formation. He is considered the father of the modern Sardana by the profound transformation that he printed to these compositions, based on giving it greater musical extension, in the inclusion of new instruments, especially the tenora (instrument creation of Andreu Turon) from 1849 and its arrangement in the cobla, which will imitate another musical formations of this type. Read more on Wikipedia

Since 2007, the English Wikipedia page of José María Ventura Casas has received more than 3,688 page views. His biography is available in 18 different languages on Wikipedia making him the 821st most popular musician.

Among MUSICIANS In Spain