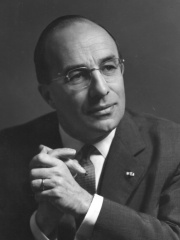 Jozef Maria Laurens Theo "Jo" Cals (18 July 1914 – 30 December 1971) was a Dutch politician of the defunct Catholic People's Party (KVP) now the Christian Democratic Appeal (CDA) party and jurist who served as Prime Minister of the Netherlands from 14 April 1965 until 22 November 1966.Cals studied law at the Radboud University Nijmegen obtaining a Master of Laws degree and worked as a lawyer and prosecutor in Nijmegen from November 1940 until August 1948 and as researcher at his alma mater from February 1941 until May 1949. Cals also worked as a legal and economics teacher in Roermond from October 1943 until June 1945. Cals became a Member of the House of Representatives shortly after election of 1948 taking office on 19 August 1948 serving as a frontbencher and spokesperson for Education and Social Work. Read more on Wikipedia

Since 2007, the English Wikipedia page of Jo Cals has received more than 42,441 page views. His biography is available in 20 different languages on Wikipedia (up from 18 in 2019). Jo Cals is the 12,011th most popular politician (down from 11,738th in 2019), the 579th most popular biography from Netherlands and the 91st most popular Dutch Politician.