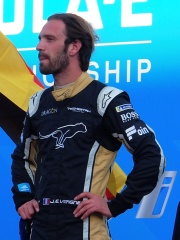 Jean-Éric Vergne (born 25 April 1990), also known as JEV, is a French racing driver who competes in the FIA Formula E Championship with the TECHEETAH Formula E team. He became the 2017-18 ABB Formula E Champion, after clinching fifth in the New York ePrix in 2018, and he became the first Formula E driver to win two consecutive championships after his repeat success in the 2018-19 season. He competed in Formula One for Scuderia Toro Rosso from 2012 to 2014, and was a Ferrari test and development driver from 2015 to 2016. Read more on Wikipedia

Since 2007, the English Wikipedia page of Jean-Éric Vergne has received more than 333,343 page views. His biography is available in 36 different languages on Wikipedia making him the 577th most popular racing driver.