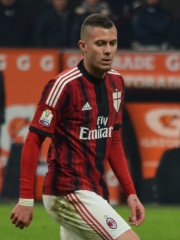 Jérémy Ménez (French pronunciation: ​[ʒe.ʁe.mi me.nɛz]; born 7 May 1987) is a French professional footballer who plays as a forward for Italian Serie B club Reggina. Ménez has been described as an ambidextrous, technically skilled, pacy playmaker.Ménez began his career spending time with various clubs in the Île-de-France region such as the Centre de Formation de Paris and CSF Brétigny. In 2001, he secured a move to Sochaux and spent four years in the club's youth academy. Read more on Wikipedia

Since 2007, the English Wikipedia page of Jérémy Ménez has received more than 886,056 page views. His biography is available in 45 different languages on Wikipedia making him the 2,020th most popular soccer player.