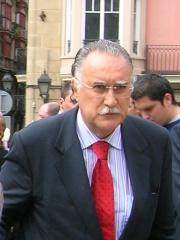 Iñaki Azkuna Urreta (14 February 1943 – 20 March 2014) was a Spanish politician of the Basque Nationalist Party. He was mayor of the city of Bilbao, Biscay in the Basque Country, from 1999 until his death. In 2012, Azkuna won the World Mayor Prize, honoring the most outstanding mayors in the world, for his transformation of industrial Bilbao into a cultural centre.Azkuna died from prostate cancer on 20 March 2014 in Bilbao, Biscay. Read more on Wikipedia

Since 2007, the English Wikipedia page of Iñaki Azkuna has received more than 24,479 page views. His biography is available in 15 different languages on Wikipedia making him the 12,774th most popular politician.