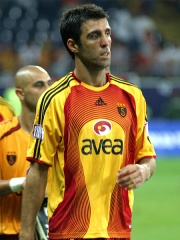 Hakan Şükür (born 1 September 1971) is a Turkish former professional footballer who played as a striker. Nicknamed the "Bull of the Bosphorus" and Kral (king), he spent the majority of his professional career with Galatasaray, being a three-time Gol Kralı (Goal King, title and award given to the annual top goalscorer of the Süper Lig), representing the club in three different spells and winning a total of 14 major titles.Şükür represented Turkey a total of 112 times, scoring 51 goals, making him the nation's top goalscorer and 19th in the world at the time of his retirement. One of the most prolific strikers of the modern era, he netted 383 goals throughout his club career as well as the fastest ever in a World Cup, in 2002. Read more on Wikipedia

Since 2007, the English Wikipedia page of Hakan Şükür has received more than 769,057 page views. His biography is available in 45 different languages on Wikipedia making him the 447th most popular soccer player.

Among SOCCER PLAYERS In Turkey