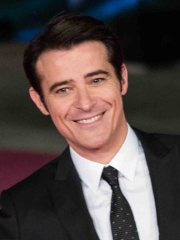 Goran Višnjić ( VISH-nyitch; Croatian pronunciation: [ɡoran ʋiʃɲitɕ]; born September 9, 1972) is a Croatian–American actor who has appeared in American and British films and television productions. He is best known in the United States for his roles as Dr. Luka Kovač on ER and Garcia Flynn on Timeless, both NBC television series. Read more on Wikipedia

Since 2007, the English Wikipedia page of Goran Višnjić has received more than 1,634,811 page views. His biography is available in 50 different languages on Wikipedia making him the 2,535th most popular actor.

Among actors, Goran Višnjić ranks 2,502 out of 8,832. Before him are Will Patton, Jean Hagen, Francesca Annis, Jesse Eisenberg, Freddie Highmore, and Tom Baker. After him are Tarık Akan, Olivier Martinez, Elizabeth Mitchell, Rex Linn, Kyle Chandler, and Alex Rocco.