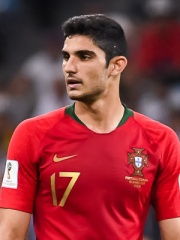 Gonçalo Manuel Ganchinho Guedes (European Portuguese: [ɡõˈsalu ˈɣɛðɨʃ]; born 29 November 1996) is a Portuguese footballer who plays as a winger, and occasionally as a second striker, for La Liga side Valencia and the Portugal national team. Guedes began his career at Benfica, making his professional debut for the reserves in April 2014 and the first team six months later. After 11 goals in 63 matches across all competitions, winning five major trophies, he transferred to Paris Saint-Germain for a €30 million transfer fee in January 2017. Read more on Wikipedia

Since 2007, the English Wikipedia page of Gonçalo Guedes has received more than 1,200,228 page views. Her biography is available in 33 different languages on Wikipedia making her the 3,760th most popular soccer player.