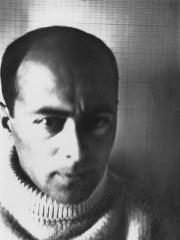 Lazar Markovich Lissitzky (Russian: Ла́зарь Ма́ркович Лиси́цкий, listen ; 23 November [O.S. 11 November] 1890 – 30 December 1941), better known as El Lissitzky (Russian: Эль Лиси́цкий; Yiddish: על ליסיצקי), was a Russian artist, designer, photographer, typographer, polemicist and architect. He was an important figure of the Russian avant-garde, helping develop suprematism with his mentor, Kazimir Malevich, and designing numerous exhibition displays and propaganda works for the Soviet Union. His work greatly influenced the Bauhaus and constructivist movements, and he experimented with production techniques and stylistic devices that would go on to dominate 20th-century graphic design.Lissitzky's entire career was laced with the belief that the artist could be an agent for change, later summarized with his edict, "das zielbewußte Schaffen" (goal-oriented creation). Read more on Wikipedia

Among ARTISTS In Russia