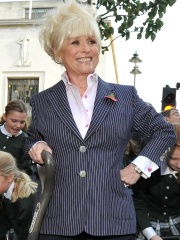 Dame Barbara Windsor, (born Barbara Ann Deeks; 6 August 1937) is an English actress, known for her appearances in the Carry On films and for playing Peggy Mitchell in the BBC One soap opera EastEnders. She joined the cast of EastEnders in 1994 and won the 1999 British Soap Award for Best Actress, before ultimately leaving the show in 2016 when her character was killed off. Windsor began her career on stage in 1950 at the age of 13 and made her film debut as a schoolgirl in The Belles of St Trinian's (1954). Read more on Wikipedia

Since 2007, the English Wikipedia page of Barbara Windsor has received more than 3,172,569 page views. Her biography is available in 18 different languages on Wikipedia making her the 4,802nd most popular actor.