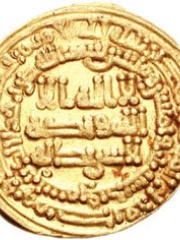 Abū ʿAbd Allāh Muḥammad ibn Jaʿfar (Arabic: أبو عبد الله محمد بن جعفر‎; 847 – 16 July 869), better known by his regnal title Al-Muʿtazz bi-ʾllāh (المعتز بالله, "He who is strengthened by God") was the Abbasid caliph from 866 to 869, during a period of extreme internal instability within the Abbasid Caliphate, known as the "Anarchy at Samarra". Originally named as the second in line of three heirs of his father al-Mutawakkil, al-Mu'tazz was forced to renounce his rights after the accession of his brother al-Muntasir, and was thrown in prison as a dangerous rival during the reign of his cousin al-Musta'in. He was released and raised to the caliphate in January 866, during the civil war between al-Musta'in and the Turkish military of Samarra. Read more on Wikipedia

Page views of Al-Mu'tazzes by language

Among SOCIAL ACTIVISTS In Iraq