This page contains a list of the greatest Cuban Actors. The pantheon dataset contains 9,996 Actors, 20 of which were born in Cuba. This makes Cuba the birth place of the 36th most number of Actors behind Iran and Colombia.

The following people are considered by Pantheon to be the top 10 most legendary Cuban Actors of all time. This list of famous Cuban Actors is sorted by HPI (Historical Popularity Index), a metric that aggregates information on a biography’s online popularity. Visit the rankings page to view the entire list of Cuban Actors. 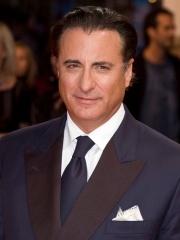 With an HPI of 65.33, Andy García is the most famous Cuban Actor.  His biography has been translated into 55 different languages on wikipedia.

Andrés Arturo García Menéndez (born April 12, 1956), known professionally as Andy García, is a Cuban-born American actor, director and musician. He first rose to prominence acting in Brian De Palma's The Untouchables (1987) alongside Kevin Costner, Sean Connery, and Robert De Niro. He continued to act in films such as Stand and Deliver (1988), and Internal Affairs (1990). He then starred in Francis Ford Coppola's The Godfather Part III (1990) as Vincent Mancini alongside Al Pacino, Diane Keaton, and Eli Wallach. He won a Latin Grammy in 2005 and received an Academy Award nomination for Best Supporting Actor for his performance. He continued to act in Hollywood films such as Stephen Frears' Hero (1992), the romantic drama When a Man Loves a Woman (1994), and the action thriller Desperate Measures (1998). In 2000, he produced and acted in the HBO television film, For Love or Country: The Arturo Sandoval Story (2000), where he received a Primetime Emmy Award and a Golden Globe Award nominations. He also starred in Steven Soderbergh's Ocean's Eleven (2001) and its sequels, Ocean's Twelve (2004) and Ocean's Thirteen (2007). In 2005, García directed and starred in the film The Lost City alongside Dustin Hoffman and Bill Murray. He also starred in New York, I Love You (2008), the dramedy City Island (2009), the romantic comedy At Middleton (2013), and the crime thriller Kill the Messenger (2014). In recent years he has had a career resurgence in such films as Mamma Mia! Here We Go Again, Book Club, The Mule (all 2018), the HBO television movie My Dinner with Hervé (2018), and Father of the Bride (2022). 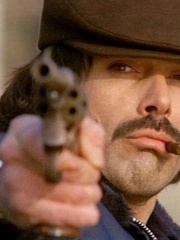 With an HPI of 57.98, Tomas Milian is the 2nd most famous Cuban Actor.  His biography has been translated into 28 different languages.

Tomas Milian (born Tomás Quintín Rodríguez-Varona Milián Salinas de la Fé y Álvarez de la Campa; 3 March 1933 – 22 March 2017) was a Cuban-born actor and singer with American and Italian citizenship, known for the emotional intensity and humor he brought to starring roles in European genre films. A student of Lee Strasberg, Milian studied method acting at the Actors Studio in New York City. In Italy, he was discovered by director Mauro Bolognini and appeared in supporting roles in several drama films during the late 1950s and early 1960s, including Bad Girls Don't Cry (1959) and as Raphael in Carol Reed's The Agony and the Ecstasy (1965). Throughout the late-1960s and early-1970s, Milian established himself as a dynamic leading actor in a series of Spaghetti Western films, most notably The Big Gundown (1966), Django Kill... If You Live, Shoot! (1967), as well as Sergio Corbucci's parody of the genre The White, the Yellow, and the Black (1975). Dennis Hopper also cast Milian in his 1971 art-house film, The Last Movie. Following a decline in the popularity of Spaghetti Westerns, Milian transitioned to roles in poliziottesco films. After receiving acclaim for his performance as a psychotic killer in Almost Human (1974), he made appearances in Emergency Squad (1974), The Tough Ones (1976) and The Cynic, the Rat and the Fist (1977). After returning to the United States in 1985, Milian continued to perform supporting roles in film productions, including JFK (1991), Amistad (1997), Traffic (2000) and The Lost City (2005). 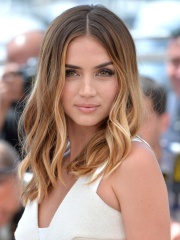 With an HPI of 54.39, Ana de Armas is the 3rd most famous Cuban Actor.  Her biography has been translated into 45 different languages.

Ana Celia de Armas Caso (Spanish: [ˈana ˈselja ðe ˈarmas ˈkaso]; born 30 April 1988) is a Cuban and Spanish actress. She began her career in Cuba and had a leading role in the romantic drama Una rosa de Francia (2006). At age 18, she moved to Madrid, Spain, and starred in the popular drama El internado for six seasons from 2007 to 2010. After moving to Los Angeles, de Armas had English-speaking roles in the psychological thriller Knock Knock (2015) and the comedy-crime film War Dogs (2016), and had a supporting role in the sports biopic Hands of Stone (2016). She rose to prominence with her role as the holographic AI projections Joi in the science fiction film Blade Runner 2049 (2017). For her performance as nurse Marta Cabrera in the mystery film Knives Out (2019), she was nominated for the Golden Globe Award for Best Actress in a Comedy or Musical and won the Saturn Award for Best Supporting Actress. She subsequently played Bond girl Paloma in the James Bond film No Time to Die (2021), and garnered praise for portraying Marilyn Monroe in the biopic Blonde (2022). 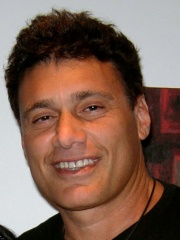 With an HPI of 54.13, Steven Bauer is the 4th most famous Cuban Actor.  His biography has been translated into 27 different languages.

Steven Bauer (born Esteban Ernesto Echevarría Samson; December 2, 1956) is a Cuban-born American actor. Bauer began his career on PBS, portraying Joe Peña, the son of Cuban immigrants on ¿Qué Pasa, USA? (1977–1980) and is perhaps most famous for his role as the Cuban drug lord Manolo "Manny" Ribera in the 1983 crime drama Scarface, in which he starred alongside Al Pacino and Michelle Pfeiffer. He also played the drug cartel leader Eladio Vuente in Breaking Bad and in Better Call Saul and the retired Mossad agent Avi Rudin in Ray Donovan (2013–2020). 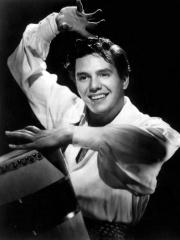 With an HPI of 53.05, Desi Arnaz is the 5th most famous Cuban Actor.  His biography has been translated into 29 different languages.

Desiderio Alberto Arnaz y de Acha III (March 2, 1917 – December 2, 1986) was a Cuban-born American actor, bandleader, and film and television producer. He played Ricky Ricardo on the American television sitcom I Love Lucy, in which he co-starred with his then-wife Lucille Ball. Arnaz and Ball are credited as the innovators of the syndicated rerun, which they pioneered with the I Love Lucy series.Arnaz and Lucille Ball co-founded and ran the television production company called Desilu Productions, originally to market I Love Lucy to television networks. After I Love Lucy ended, Arnaz went on to produce several other television series, at first with Desilu Productions, and later independently, including The Ann Sothern Show and The Untouchables. He was also the bandleader of his Latin group, the Desi Arnaz Orchestra. He was known for playing conga drums and popularized the Conga line in the United States. 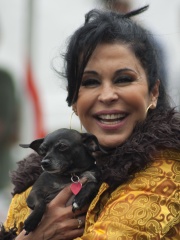 With an HPI of 51.49, María Conchita Alonso is the 6th most famous Cuban Actor.  Her biography has been translated into 23 different languages.

María Concepción Alonso Bustillo (born June 29, 1957), better known as María Conchita Alonso, is a singer, actress and former beauty queen. She has participated in film and television productions, and was nominated for the Independent Spirit Award as Best Leading Actress in 1996 for her role in Caught. As a singer, she has received several gold and platinum records, and has been nominated for three Grammy Awards. Alonso was the first Latin American actress not born in the United States to star in a musical on Broadway. The musical was Kiss of the Spider Woman at the Broadhurst Theater in 1995. 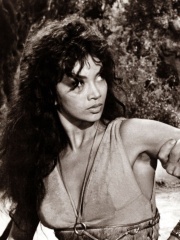 With an HPI of 50.75, Chelo Alonso is the 7th most famous Cuban Actor.  Her biography has been translated into 16 different languages.

Chelo Alonso (born Isabel Apolonia García Hernández, 10 April 1933 – 20 February 2019) was a Cuban actress who became a star in Italian cinema, and ultimately a 1960s cult film heroine and sex symbol in the U.S. She was well known for playing femmes fatales with fiery tempers and sensual dance scenes. 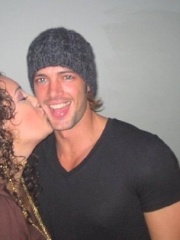 With an HPI of 49.62, William Levy is the 8th most famous Cuban Actor.  His biography has been translated into 38 different languages. 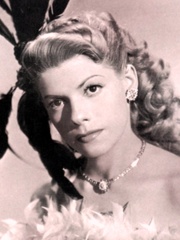 With an HPI of 48.50, Ninón Sevilla is the 9th most famous Cuban Actor.  Her biography has been translated into 21 different languages. 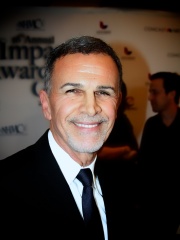 With an HPI of 48.14, Tony Plana is the 10th most famous Cuban Actor.  His biography has been translated into 22 different languages.

Pantheon has 20 people classified as actors born between 1903 and 1988. Of these 20, 15 (75.00%) of them are still alive today. The most famous living actors include Andy García, Ana de Armas, and Steven Bauer. The most famous deceased actors include Tomas Milian, Desi Arnaz, and Chelo Alonso. As of April 2022, 3 new actors have been added to Pantheon including Jorge Luis Pila, Daisy Fuentes, and Eric Lopez.

Which Actors were alive at the same time? This visualization shows the lifespans of the 4 most globally memorable Actors since 1700.