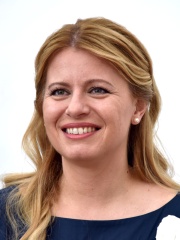 Zuzana Čaputová (Slovak pronunciation: [ˈzuzana ˈtʃaputɔʋaː]; née Strapáková; born 21 June 1973) is a Slovak politician, lawyer, and environmental activist who has been President of Slovakia since 15 June 2019. Čaputová is the first woman to hold the presidency, as well as the youngest president in the history of Slovakia, elected at the age of 45.She first became known by prevailing in a decade-long struggle against the situating of a toxic landfill in her hometown of Pezinok. Read more on Wikipedia

Since 2007, the English Wikipedia page of Zuzana Čaputová has received more than 578,571 page views. Her biography is available in 61 different languages on Wikipedia making her the 7,752nd most popular politician.

Among politicians, Zuzana Čaputová ranks 7,709 out of 14,801. Before her are Kōichirō Matsuura, Kamehameha II, Louis X, Duke of Bavaria, Benjamin Mkapa, Achille Varzi, and Spyros Kyprianou. After her are King Yi of Zhou, Julia, Infanta Elena, Duchess of Lugo, Albert Zafy, Emma Darwin, and Khaled Mashal.