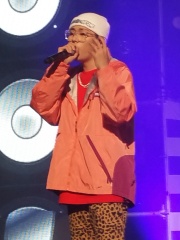 Woo Ji-ho (Korean: 우지호; born September 14, 1992), known professionally as Zico (Korean: 지코), is a South Korean rapper, record producer, singer and songwriter. He debuted as the leader of the boy band Block B in 2011 and made his first solo release in 2014.Zico is notable for his crossover skills within the Korean hip hop scene, maintaining an underground reputation along with mainstream appeal as a Korean idol. He is a record producer of both K-pop and Korean hip hop music. Read more on Wikipedia

Among musicians, Zico ranks 2,320 out of 2,662. Before him are Sam Rivers, Gus G, Amon Tobin, Jerry Harrison, Eddie Rabbitt, and John 5. After him are Madeleine Peyroux, Fat Mike, Gil Shaham, Warren Ellis, Amen, and Hallucinogen.

Among MUSICIANS In South Korea